A graduation ceremony was held today at Canoga Park Elementary School, commemorating students’ completion of fifth grade and marking their transition to local middle schools when the 2014/2015 school year begins in mid-August.

Commencement began this morning at 8:30 a.m. following the popular “Breakfast in the Classroom” program and according to residents as far away as Owensmouth and Gault “seemed to go on forever.” The feel-good event featured speeches, the slow recitation of students’ names during presentation of certificates of graduation, or diplomas, bearing each student's name as well as a scratch-and-sniff sticker of a smiling banana that reads 'Awesome Job!', more speeches, songs, and more speeches, all broadcast over Canoga Park Elementary’s famous window-rattling 128 dB public announcement system retrofitted from a World War II-era air raid siren and affectionately nicknamed “Ol’ Blarey.”

“We make sure to read each students’ name carefully and slowly to avoid mispronunciations and to give each child a sense of self-worth and accomplishment, sometimes even repeating names,” explains Judy Maxwell, a teacher’s aide at the school. “Also, it helps to kill time.”

As for the words of inspiration and encouragement read to the kids at the beginning of the ceremony, at the mid-way point during the ‘M’ names, and at the end, after each child has been presented with his or her own mimeographed award: “It’s actually the same speech over and over,” Maxwell admits with a good-natured shrug. “No one seems to notice.” 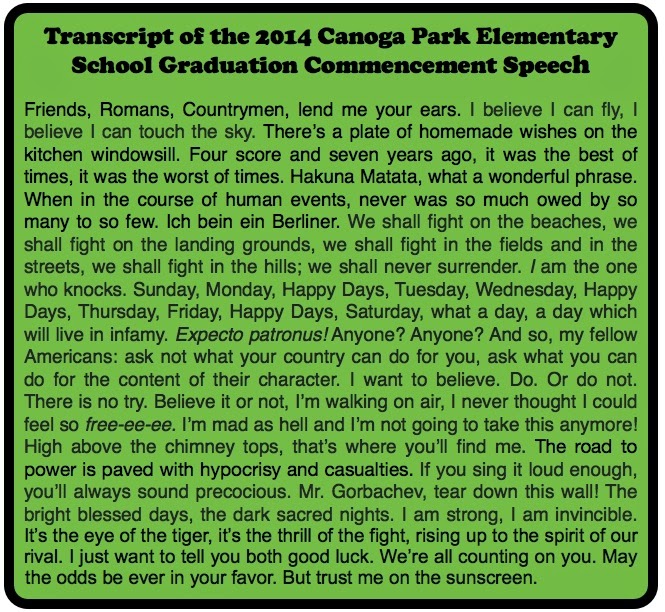 While the school year doesn’t officially end at Canoga Park Elementary until June 5th, the ceremony was held today since Tuesday, Wednesday and Thursday will be filled with ceremonies marking the graduations of all the other grades into the following grades.

“It’s important to recognize these achievements at the grade school level no matter how completely ridiculous, artificial and meaningless they may seem to you or me,” says Maxwell of the momentous occasion. “This may be one of only six chances - well, nine if you count middle school - for these kids to experience a graduation ceremony. According to what we’re seeing, before finishing twelfth grade, many of these kids will have dropped--”