The Canoga Park Division of the Canoga Park/West Hills Chamber of Commerce is pleased to announce the release of the Official 2015 Map and Guide to Local Valentine’s Day Unlicensed Street, Parking Lot, Sidewalk and Public Park Vendors.

Residents hoping to remember their sweetheart with a special gift for St. Valentine's Day can conveniently find what they need right here in town — they need only refer to the map reproduced below to know where to get that special something for that special someone.


And the chamber's Special Events Coordinator Bernice Solverson reports it's easier than ever for Canoga Park residents to shop locally. "The map's a bit superfluous. Just walk outside to the nearest corner — really, any corner," she says. "Hell, you probably don’t even need to go to a corner. Just walk out to the end of your driveway and chances are there's someone who's set up shop right there.” 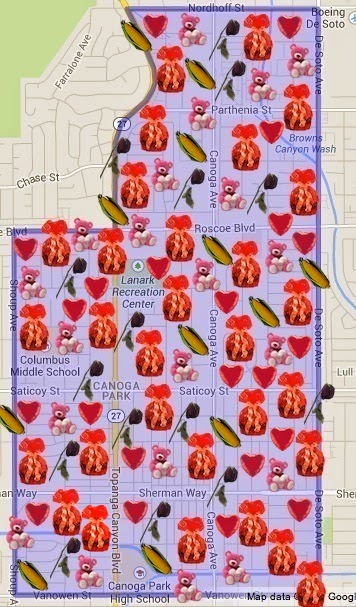 Solverson notes a select number of "early bird" vendors will be selling their holiday merchandise at larger intersections and gas station parking lots on Friday, mid-afternoon until dusk; while all the vendors will be open for business on Saturday from approximately eight-thirty a.m. until about nine p.m. or until they finally just give up and go home, presumably to wash the day's grime off of themselves with unsold overly perfumed soap and forget their troubles by binging on unsold low-grade chocolate. Or vice-versa.
at 3:07 PM No comments:

While recent high winds have vexed West Valley residents with falling tree branches and tumbling patio furniture, one Canoga Park resident has turned the breezy weather into a profitable venture by offering a valuable service to West Hills residents with Italian Cypress trees suffering from unsightly, wind-blown branches. “What I do is I take my broom, and I push the branches back in place, like this,” says itinerant laborer Desmond Churyk, as he demonstrates his trade yesterday outside a Foxboro Lane residence, near where he had just finished a job sweeping something. The stately, largely column-shaped conifer, known only to grow west of Shoup Avenue, is a popular landscaping plant in the tony West Hills area. Mr. Churyk charges $10 per tree and can reach out-of-place branches up to ten feet high with his broom. For an added fee, he will bring a step-ladder, extending his reach another four and a half feet.

Owen Smouth, the editor-in-chief of this online newspaper, publicly apologized for admittedly fabricating a tale of being hit with an errant soccer ball while walking through Lanark Park in 2003. In the past, on an appearance on “Good Morning Valerio Street,” he described an incident where during a soccer, or fútbol, game being held in the park, a player kicked the ball that overshot the goal and went out of bounds where it flew towards some people walking by — including Smouth himself who said the ball glanced off his thigh and left a smudge on his chinos. But according to witnesses, Smouth was not hit and was nowhere near the old lady who was. “He was like four or five feet away,” noted a source who wished to remain anonymous. “I made a mistake in recalling the events of twelve years ago. ...Whoops!” Smouth later said in a statement. The Quilt considers the matter closed.

A majority of the employees at Canoga Park High School have voted to turn their school into a charter campus and break ties with the Los Angeles Unified School District in an effort to gain more control over funding, academic programs and other aspects of education.  “We’ve fully got the support of 65%, or three-quarters, of the teaching staff,” reports Joseph Hitchings, the advanced calculus teacher spearheading the project. Adds AP English teacher Betty Winslow, “We am very incouraged about this.” In related news, Canoga Park High senior Valeska Stoica is moving onto round two of the semi-finals of the LAUSD Spelling Bee after beating eight other contestants by successfully spelling the word “charter.”

While recent high winds have vexed West Valley residents with falling tree branches and tumbling patio furniture, some unwary West Hills residents have been additionally dealt a financial blow by falling prey to the age-old Italian Cypress con currently being plied by swindlers who have descended on the area from nearby Canoga Park, reports the Better Business Bureau of Southern California. “Typically, what they’ll do is tell you they just finished a job in the area sweeping something when they noticed your Italian Cypress trees have some unsightly, wind-blown branches,” explains BBB spokesperson Leann Wells, “and for usually ten dollars a tree, they’ll take their broom and push the branches back into place.”  Wells explains that the conifer, a popular landscaping plant, is very resilient, maintains its largely column-like shape naturally and will go back to normal on its own within a few days of the wind subsiding.
at 3:52 PM No comments:

The nocturnal mammal’s prediction came at 8:34 p.m. as he began his nightly foray into neighborhood yards looking for sustenance in the form of rotted fruit, garbage and cat feces when moments later the telltale window-rattling whup-whup-whup clamor and erratic, unnatural light from above began as a police helicopter flew into the area. (The animal, spooked, immediately disappeared into a crawlspace under a nearby house.) An official proclamation announcing possum Paul’s forecast was to be read by attending representatives of the Canoga Park Friendly Neighborhood Council to a small gathering of the press and the public, but the idea was quickly abandoned when it was decided no one would be able to hear it over the noise from the circling copter.

While there is no mystery as to how the tradition of looking to the lowly possum for police air traffic activity came to be - it’s been traced to superstitious Slovak settlers who came to the area in the 1980s - what baffles possums and residents alike is exactly why the police helicopters circle one small area for so long. Despite broad, vague explanations by the LAPD and articles in local newspapers and free weeklies transcribing those broad, vague explanations, the phenomenon remains an insoluble mystery.


One thing’s clear, though: Parthenia Paul’s track record can’t be argued with - the feisty marsupial and his predecessors have been right the last seven years running. “Frankly, it’s not too surprising,” explains top-hatted master of ceremonies Mike “Ronnie” Dorado. “It goes on pretty much every night around here, and once it starts, it’s like it never ends.”
at 8:52 PM No comments:

A Canoga Park donut shop, or donuteria, brazenly flouted trademark ownership law this weekend by advertising a “Superbowl [sic] Special” on a flyer on the window of its front door.

Peppy Donuts on Roscoe Boulevard at DeSoto, in Canoga Park's bustling RoscoSoto neighborhood, is offering twelve donuts for a discounted price during the morning of Sunday, February 1. But in doing so, the shop refers to the championship game by its actual trademarked name rather than an awkward approximation formed by a series of vaguely similar words to obliquely describe it, as mandated by federal law.

“This can leave them wide open to an expensive lawsuit by the notoriously litigious NFL,” notes intellectual property lawyer Lou Steimart with the firm Steinmart, Marshall & Korvette. “But I think such an inconsequential example by a small business will probably fly under the radar.”

Not so, according to a customer seen snapping a picture of the flyer with his phone with one hand while holding a just-purchased cup of coffee and a half-eaten donut with the other.

“Don’t get me wrong, I love this place,” says Peppy Donuts regular Téodor Pasternak. “But this flyer...! Misspellings, typos, excessive punctuation, cluttered layout, stolen clip art with watermarks on it - all that I can forgive. But the dollar sign after the numerals? Sorry, that I won’t stand for.”

Pasternak later returned with his laptop to make use of the shop's free wi-fi to find specific email addresses for the appropriate individual or department within the National Football League organization and their legal counsel to forward the photo of the flagrant trademark violation to "and to get another one of those crullers - man, those things are addictive!"
at 8:32 AM No comments: