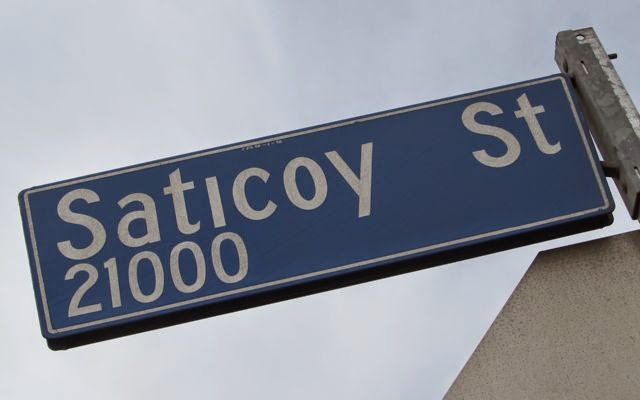 The irons, presses, washers and dryers have all been sold and carted off. All that’s left are a few boxes of bottled cleaning solution, spot removers, brushes and other tools of the trade - and the unclaimed property of a couple dozen customers.

Susie “Cookie” Reyes shrugs as she hangs up the telephone in her nearly empty cleaners shop.

“Well, I tried everyone one last time.” She’d just finished making nearly twenty-five calls to customers who’d dropped off their cleaning but never returned to claim it, and today at 6 p.m., she’s closing her doors for the last time. “If they get here before then, they’ll get ‘em back for free. No charge. After that, I’m donating everything to Goodwill.”

Reyes is - or as of this evening, was - the owner and operator of the erstwhile Velvet Cleaners on Saticoy, just east of Topanga Canyon Boulevard, in Canoga Park’s bustling Satipanga Business District.

“When we opened Velvet Cleaners in 1967, there was more of a demand for velvet cleaners. You see, a lot of people were wearing velvet then.”

Of course, located here in Southern California, she’s had her share of celebrity customers, too - regulars remember a whole wall of framed and signed 8x10s behind the cash register. Her most memorable?
“In 1970, the rock & roll group The Partridge Family came in with a rush job - a skunk had gotten on their tour bus and sprayed everything.”

Getting the stink out of their signature velvet costumes in time for a scheduled appearance, or gig, at an exclusive hotel was tricky, but Reyes was up to the challenge. “I managed to take care of all six outfits in twenty-six minutes. Today, well, I’d only have twenty-two minutes.”

The late 60s into the early 70s were salad days for Cookie and her other velvet cleaners at Velvet Cleaners. But when the crushed velvet craze died down in the early 1970s, business slowed considerably.

“I had to let most of my velvet cleaners go and did a lot of the velvet cleaning myself. I tried to make up for [the downturn] by specializing in cleaning velvet paintings.  You know, getting dust off, removing fly specks, polishing the frames, like that there. That helped a little bit, I guess,” she says.

Velvet Cleaners experienced a small but appreciable uptick in business in the early 80s after Waldenbooks began selling velvet bookmarks that eventually needed cleaning, but even that wasn’t enough to reverse the decline of Reyes' velvet cleaning business. She’s struggled since and last November made the decision to retire when her lease expires in early June.

The owner of Velvet Cleaners thinks back over her velvet-cleaning career of forty-seven years with a certain amount of pride and also with something that is by no means regret - but rather, candid self-realization and honesty, a hallmark of the 79-year old velvet cleaner’s Velvet Cleaners velvet cleaning business.