A memorable success is how everyone who attended or participated in Canoga Park’s 27th annual Memorial Day Parade will remember this morning’s patriotic festivities.

The parade, honoring those who died while serving in America’s armed forces, featured participants from across the San Fernando Valley (and even some from as far away as exotic Pasadena and glamorous Las Vegas) while thousands of spectators lined Sherman Way to cheer them on — and to remember those we’ve lost.


On with the parade — of photos!  [Those with premium Quilt subscriptions can click on each image below to see it larger and in glorious detail.] 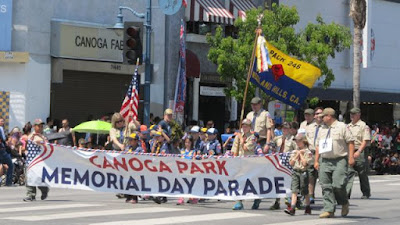 The Carrying of the Official Banner — the parade begins!

No, you're not seeing things — those are kilts, a "traditional garment resembling a
knee-length skirt of pleated tartan cloth and...worn by men as part of Scottish
Highland dress." And no one wears 'em better than the Pasadena Scots. 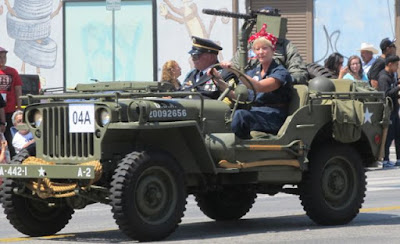 Rosie the Riveter had spectators riveted to the passing parade.
And is that General Dwight D. Eisenhower in the passenger seat?
No. Ike died in 1969 of congestive heart failure.

Shawn Bayliss happily accepts contributions of cheers and well-wishes
from the crowds — and that's something no one can find fault with! 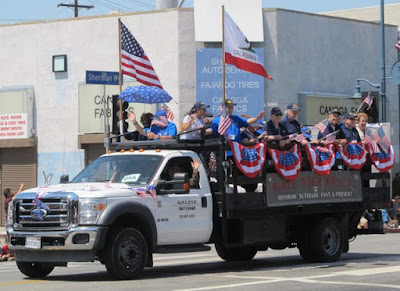 Here's some of the Wings Over Wendy's flyboys — they've been
a fixture at West Hills Wendy's (Platt Village) since 2002!  They
meet there every Monday at nine a.m. for coffee and conversation.

Busy, busy Matt Dababneh takes time out during the parade to look over some proofs
for the next 18 campaign flyers that will be appearing in your mailbox by Wednesday. 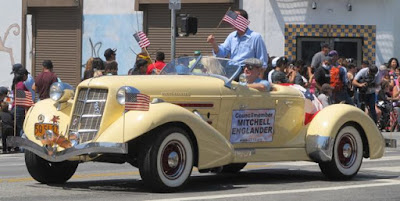 It's not like Mitch Englander to hide behind the flag, but in this case, thanks
to a poorly-timed click of the camera shutter, it just couldn't be helped.

Did You Know...?™
Mitch is officially the only LA City Councilperson worth a damn. 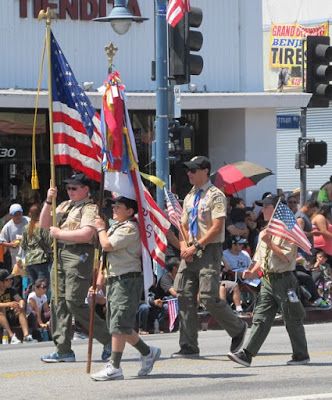 What would a parade be without flag-toting Boy Scouts?
Nothing, that's what. 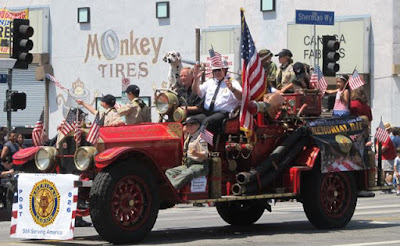 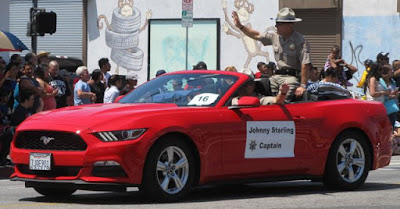 Captain Johnny Starling of the CHP waves to the crowd.

Did You Know...?™
The Annual Memorial Day Parade marks the only day of the year
there is actually a sufficient number of police in Canoga Park. 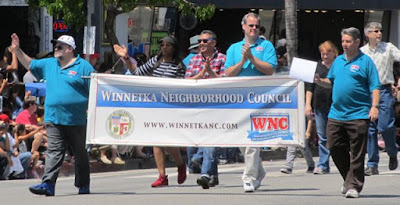 The Winnetka Neighborhood Council isn't too proud
to march directly on the streets of Canoga Park... 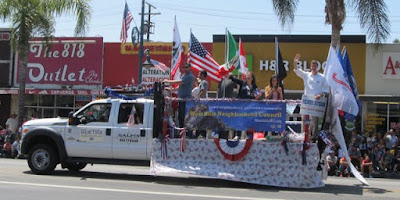 ...not like some fancy-schmancy Neighborhood Councils we could mention,
that apparently demand to be chauffeured through our fair streets. 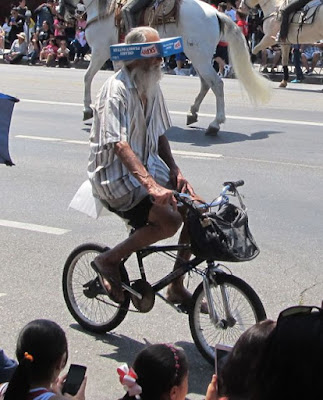 Is there any sight more stirring, that makes the heart swell with more pride, than that
of an old man riding against parade traffic with a Skippy peanut butter box on his head? 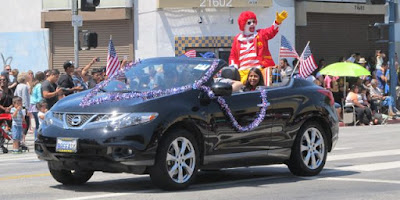 And what would a parade be without a clown?
Here Ronald McDonald, who lives in the ball pit in the
PlayPlace at Roscoe Blvd. McDonald's, waves to fans. 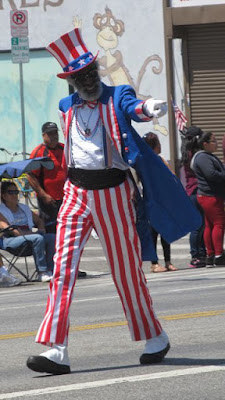 The crowd went wild for this
very charismatic Uncle Sam...

...and his Liberty Tax Dancers.
The Statues of Liberty frolicked, gamboled
and cavorted — and were an enormous hit.


It's just not a parade without... 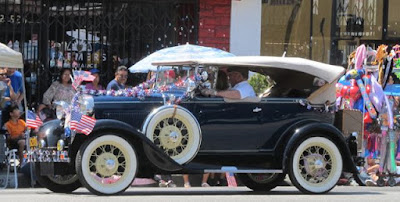 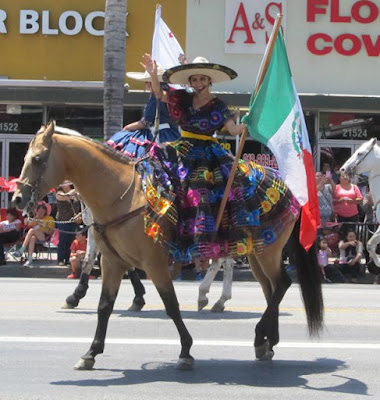 A young lady of the International Tae Kwan Do College
stunned spectators with a wood-splitting high kick! 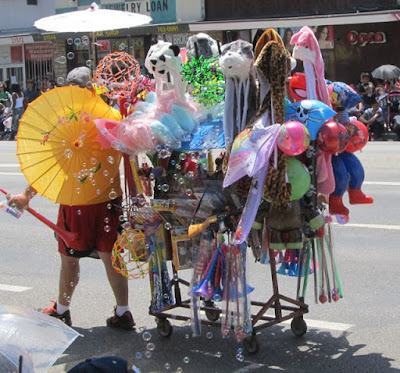 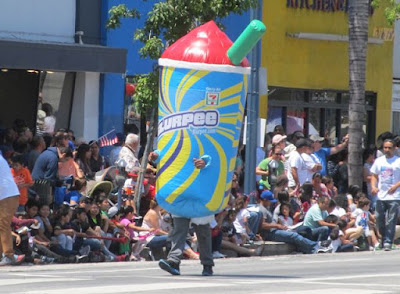 With the hot sun beating down on the south side of the street,
this oversized treat took his very life in his hands, marching
past the parched, thirsty crowd. Thank you for your Slurpice! 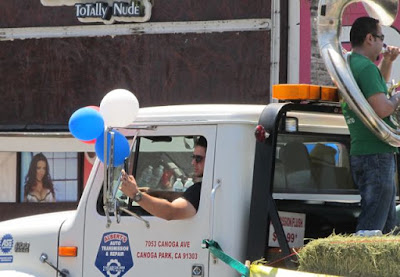 There's no better time to be distracted by your phone than
when piloting a huge flatbed truck with a banda group on it
through a parade route lined with thousands of spectators! 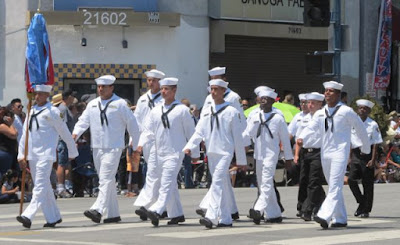 The Canoga Park Elks, Lodge 2190, made the scene
in this vintage truck from H.W. Allen Plumbing.

If we didn't know better, we'd think that JB Wholesale
Roofing Supplies was just making a delivery and accidentally
got into the staging area for the parade. However... 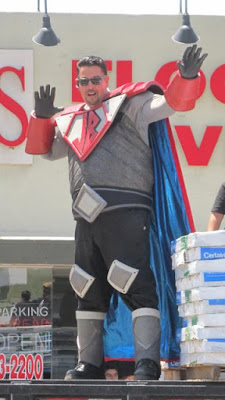 ...the presence of Captain JB — mild-mannered contractor until he got a splinter
from a radioactive shingle — made this one of the parade's most popular floats.
See Captain JB: Days of Roofers Past from Marvel
Entertainment, in theaters everywhere Friday June 17.

All good things must come to an end: The LA Fire Department brings
the day's parade festivities to a close in a calm and orderly fashion.

That's the end!  See you next year!

To our Canoga Park neighbors, thanks for coming out!

And to those visiting from outlying areas...
♬ Until we meet once more, here's wishing you a happy voyage home! ♪ ♫

And good luck with that, what with Sherman Way closed all the way to
Topanga Canyon so the side streets are going to be a complete clusterf—

Mark your calendars: the 27th annual Canoga Park Memorial Day Parade will be heading down Sherman Way this Memorial Day, which this year falls on the last Monday in May.

Spectators can expect new participants marching proudly with such old favorites as the West Hills Wendy’s Six-Hour Sit-In Seniors and stepping their way carefully behind the world-famous Chatsworth Pooping Stallions.

“We’ve had applications from many new organizations for the 2016 celebration, and we’ve green-lit quite a few of them,” says Murla Havemeyer, Canoga Park Friendly Neighborhood Council’s Chairperson of Parade Organizement.

No Bull: 'Pits' To Participate In Parade
The local pit bull contingent will be out in full force this year — perhaps rather fitting since the wonderfully unpredictable animal was recently named Official Pet of Canoga Park.
“Pit bull owners petitioned us for some time now to allow them to march in the parade,” Havemeyer says. “We figured this would be the year. Besides, due to past, eh, incidents, we find it’s a lot safer having them in the middle of the street, away from the spectators rather than pushing their way along the crowded sidewalks and attacking children who foolishly try to pet them.”

Package Theft Group To Steal Spectators' Hearts With Spellbinding Display
The West Valley Porch Parcel Pilferers are set to wow the crowds with a special choreographed dance routine using Amazon.com boxes, which they’ll be performing at four major intersections along the parade route. “And we’re lucky to have them,” Havemeyer says proudly. “They’re really giving up a lot by participating, what with so many West Hills residents expected to be among the spectators, leaving their homes unattended.”

Illegal Street Racing Demonstration
Thanks to the unprecedented growing popularity of illegal street racing across the West Valley, parade-watchers will enjoy a demonstration of some of the area’s best racers showcasing their most popular moves with signature derring-do.

“They’ll be doing burnouts, donuts and even Topanga drifts for the crowds. They were hoping to perform a classic hit-and-run, but we had to put the kibosh on that,” the parade chairperson states. “While hit-and-runs are now undeniably a huge part of Los Angeles culture, especially here in the West Valley, it would be all but impossible to make it happen.” The ‘hit’ would be no problem, Havemeyer concedes, but the hemmed-in structure of a parade route precludes any kind of successful getaway.

“However, anything can happen!” Havemeyer notes with a twinkle in her eye. “The Winnetka Vocational High School Marching Band, who will be directly in front of them, has taken out additional insurance.”

“It’s kind of bittersweet for us,” says band director Dr. Harry L. Platt.  “On one hand, we’re not exactly thrilled to have cars peeling out at sixty miles an hour less than twenty yards behind us. But on the plus side, the band’s rendition of ‘Cake By the Ocean’ just wasn’t really coming together and with all those roaring engines, no one will be able to hear us.”

Live-Tagging Gets Spectators Involved
The Tagger Collective of Canoga Park will be featured this year, too, in a new, interactive aspect of the parade. “F_ckeen...we’ll be running back and forth an’ shit? All over f_ckeen Sherman Way, for the entire length of the parade route an’ shit.. You know, hitting newspaper boxes, street surfaces, light posts, those big f_ckeen drums the marching bands use, with a variety of tags an’ shit” notes Canoga Park tagger laureate DAИK.

Those at the edge of the curb beware — “F_ckeen...you may get tagged an’ shit,” laughs the ubiquitous graffiti artist. Spectators needn’t worry too much, though — spray paint, Sharpies, paint pens and stolen Priority Mail labels the taggers use come off easily from hair and skin with everyday industrial solvent and just an hour or so of scrubbing with an abrasive pad or wire brush.

Souvenirs & Refreshments Reflect Local Culture
Vendors will be offering new and exciting merchandise as they ply their trade along the approximate 1-mile route, too.
“Expect to see pushcarts offering the usual unlicensed inflatable Spider-Men and Batmen,” notes senior editor of West SFV Parade Retailer Weekly Matthew Cantrell. “But this year, knockoff Angry Birds toys will be part of the mix, as well as local favorites such as grilled-on-a-makeshift-hibachi-in-the-trunk-of-a-car corn cobs and small, colorful plastic vials of medical marijuana.”

The 27th Annual Canoga Park Memorial Day Parade runs east along Sherman Way from Owensmouth  Avenue to Cozycroft Street and begins at 11 a.m. Monday May 30. Get there well before the parade starts to secure a good spot, or just be an asshole and push your fat carcass in front of someone who actually did get there early.
at 1:22 PM No comments: