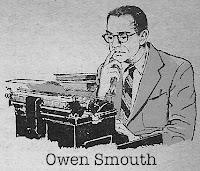 FAR TOO FEW ACCOLADES are given, it seems, to our intrepid young photographer, Parker Glassport, who toils anonymously with his trusty Fisher Price #784 (with the Leica 50 mm f0.95 Noctilux lens) to illustrate most of what you read here on the Quilt with his highly professional pictures, or “photographs.”

When he’s not on assignment dutifully tagging along with our crack team of investigative reporters (no longer our crack-addicted team of investigative reporters since Nita Keswick and Sherman Farralone successfully completed their court-mandated rehab at Overpasses of Reseda), Parker finds time to chronicle the weird, the wonderful, the sublime, the ridiculous, the outrageous, the potentially illegal, the odious, the odorous, the perverted, the delightful, the eccentric, the delightfully eccentrically perverted — in short, all that makes Canoga Park and surrounding environs just so wonderful.

So I said to Parker just the other day, I said to him, “Parker,” I said, “Just what do you do with all those marvelous pictures you take that we don’t run?”

He told me he uses them mostly for blackmail, but the ones he can’t force people into buying he hopes to use in a gallery show some day.

“Phpht! Gallery show — around here?! Yeah, good luck with that, pal!” I told him. “No, we’ll print them in the Quilt instead and give you that exposure (ha! — photography joke) you crave.
"What’s more," I continued, "What's more, it’s ready-made content I have no intention of paying for since you take them on company time so I probably already own them anyway, and we can throw 'em up on the site quickly.

"And perhaps best of all, Parker," I said to him, I said, "Perhaps best of all, with your little pictures popping up now and again we don’t need to worry about the same article being on the front page for weeks at a time while our reporters are out digging up new dirt on important local news stories (or in the cases of Nita and Sherman, relapsing)."

Anyway, it’s with all that in mind that we unveil our latest feature...  aah — name, name we need a goddamn name, Smouth — eh, we’ll call it, uh...“Take A Picture, Parker Glassport, It’ll Last Longer!”  Christ almighty, Smouth—brilliant. You're on fire today, man!

We’re sure it’ll be a welcome addition to all those other regular features you Canoga Park Quilt subscribers have come to cherish, like the one where the kids send in letters and the one where locals ask questions, and I think there was some sort of “What’s Happening Around Town” thing we used once or twice. Anyway, enjoy!


There. That oughtta hold the little bastar— Whaddaya mean ‘still on the air’?! We’re an online newspaper! 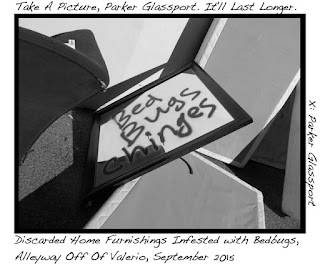 
• Frantic Youths to Neighborhood Council: We're Running Out of Things To Tag

THE CANOGA PARK Friendly Neighborhood Council convened for a rare emergency meeting last night to discuss a significant threat to the culture of Canoga Park: Local taggers are in dire peril of running out of places to hit.

“With our current rate of defacement, my tagging crew — all of our tagging crews! — could completely run out of things that don’t belong to us to mark with our names and, in many cases, specific gang affiliations, in just a few days, an’ shit,” said local tagger DAИK, whose name means “disagreeably damp and musty.”

“Ladies and gentlemen, I appeal to your sense of community, your sense of civic pride: We’re at the tipping point here,” implored local tagger LOeR who brokered a truce permitting rival taggers to appear at the meeting “without starting no shit with each other, yo” and whose own well-known tags have graced everything from billboards to panel trucks in the West Valley. “If something isn’t done immediately, we simply won’t have any places left to tag. And that truly, truly would be a tragedy of unprecedented proportion an’ shit.”

One by one, local taggers stood up to address the council and ask them to ponder the future of a Canoga Park with nothing left to tag, and also to use keys and paint pens to mark up the podium.

‘PuBe’ discussed the emasculating shame he would suffer “if, you know, my girl walk down Sherman Way and not see my name on a parking meter, lamp post or bus stop an’ shit.”  ‘SpOOge’ decried the lack of new residential construction in the area, and “how I long to once again feel that can of pressurized enamel become an extension of my own arm as I mark up virgin stucco walls, newly-installed siding and portable toilets an’ shit.” And ‘Fee-C’ shamed local merchants and apartment house owners for not bothering to re-re-re-repaint their steel fire doors anymore. “Some of those tags have been up there eight, ten months,” he explained. “Most of those guys are long dead or in jail, and these people don’t even have the common decency to paint over it an’ give us more room to work an’ shit!”

By the time the young men — a cross-section of Canoga Park's best & brightest — were finished making their heartfelt pleas, there wasn’t a dry eye in the entire Canoga Park Community Center, though some suggest that it was due to noxious aerosol paint fumes in an enclosed area with poor ventilation.
“The ability of so-called ‘taggers’ or urban artists, as I call them, to permanently ‘vandalize’ or enhance, as I call it, public and private property is extremely important for the lifeblood of an area such as Canoga Park,” said main speaker Evan Schwinn, whose Twitter profile, Facebook page and biographical blurb beneath opinion pieces on Huffington Post describes him as both an NPR and Power 106 listener. “Tagging is the means through which area youths communicate. And it’s most definitely art in its purest form. If Canoga Park runs out of things to tag, it is effectively censoring artists, and if Canoga Park supports censorship, I for one would not want to live in Canoga Park.”

Schwinn, who lives in Santa Monica, is a familiar presence at various “urban art” events in the West Valley and has made friends with some of the local crews, even earning their trust enough to go out on tagging missions, or frolics, as they’re called.

Says DAИK of him, “Dude’s the whitest guy I know, even with the flannel jacket an’ that New Era snapback he got at T-Mart...shit, he’s tryin’ way too hard. But he bought me a case of Krylon from Home Depot last month, so, uh, I guess he’s cool..”


A digital marketing project engineer working for an investment real estate firm based on LA’s Westside, the tall, blonde Schwinn says he enjoys traveling to the West San Fernando Valley to see some of his favorite artists’ latest pieces.

“I live north-of-Wilshire in a $4,800 a month two-bedroom apartment,” he says with an unusual mixture of pride and embarrassment. “So obviously that’s not the same, uh, atmosphere as around here. And that’s why this magnificent art form must continue to flourish! ...Um, over here.”

Schwinn then narrated a PowerPoint presentation to those in attendance to show the extent of the dire situation the area faces to, as he said, “let the images speak for themselves an' stuf—  ...uh, pardon. An' shit.”
Head of Canoga Park’s Neighborhood Beautifization Committee Donald Culross eventually took the podium to allay mounting fears and prevent an already tense situation from developing into a full-blown panic. “Please, people, please. We’re going to get through this,” he implored “Look, ‘The Village at Topanga’ opens in less than a week and then you’ve got acres and acres of brand new, pristine real estate to, er, decorate.”
at 3:01 PM No comments: