DATELINE: DE SOTO AVENUE
A new taxi/ridesharing company serving addresses throughout Canoga Park that hopes to be the “next big thing” is the brainchild of a local craft beer brewer and former website designer.

Called “NOGA,” the service offers an alternative to traditional cabs and public transportation with “a much quicker, yeah, more personalized experience,” according to NOGA company founder, president, and, as of yet, sole driver Brian Rauschebart.

After downloading a computer application, or app, customers can summon Rauschebart to their current location via smart cellular telephone, or smartphone, where they will get in his 1975 Ford Gran Torino Squire station wagon (recognizable due to the large fun-fur beard - modeled after Rauschebart’s own impressive whiskers - attached to its grill) and he will drive them to their destination. But that’s where the similarities to regular taxicab service ends.

“I put, like, a vintage Hungry Hungry Hippos game in the way-back that’s intentionally missing some marbles but has - get this - some raaandom pieces from Battleship mixed in,” says the ambitious 28-year old.

Riders themselves needn’t worry about getting hungry on their ride through Canoga Park city limits: Complimentary juice boxes and loose Cheerios are thoughtfully scattered throughout the vehicle. “Also I went to that Filipino market at Roscoe & DeSoto,” continues Rauschebart, “and bought a boatload of insane snacks - like squid chips and yam candy and stuff, with, like, absurd characters on the packages.”

During the ride, customers can choose to listen to Rauschebart threaten to “turn this car around” (tongue-in-cheek, of course), a “Stuff You Missed In History” podcast about Nikola Tesla or a cassette tape of Rauschebart’s ex-girlfriend Amy playing 80s hits on a ukulele.

So far the service has at least one steady customer, Rauschebart’s current girlfriend Sarah. “Um...yeah. He, um, convinced me to sell my Civic and use the money to invest in this thing, so now he has to drive me to and from work," she says. "And I can tell you I’m getting really tired of listening to what’s-her-name tunelessly warble and strum ‘Papa Don’t Preach.’”
at 4:28 PM No comments:

Winter’s increasingly chilly weather brings a tinge of sadness to Valerio Street resident Gilbert Almeida as it heralds the end of the open-front-door season. Colder nighttime temperatures have forced the 34-year old oil change technician (with Peppy Lube on Saticoy) to actually spend large amounts of time inside the house he rents in exchange for a significant portion of his paycheck, with the front door of his cozy, mid-century home closed.

“I like keeping it open an’ sh_t,” says Almeida, noting that doing so helps keep his neighbors abreast of his tastes in music, Xbox gaming, late-night television viewing, recently purchased electronics and the status of his tumultuous relationship with his on-again off-again girlfriend, Renatta (who, he reports, is currently "being a total bitch and staying with her f_cking ugly-ass sister in Reseda").

Almeida takes pride in intentionally keeping the main entrance of his house wide open during the warmer months from the moment he gets home from work until he goes to bed, often later than two in the morning, up to which point he’s known to sit outside in a white plastic resin chair in his front yard as far away from the door as possible, with his stereo turned up appropriately loud enough so that he might enjoy it regardless of the distance from the sound system while using his smartphone to complain via emails to his landlord about his home’s significant housefly problem, constant mosquito bites, reoccurring rat and cockroach infestations and an incident with a wayward family of raccoons in his kitchen; via Twitter to the LAPD regarding a recent break-in resulting in the loss of his previous 58” flatscreen television and gaming system; and via texts and postings to friends and relatives on various social media sites about why Renatta is "always on the rag."
at 11:30 PM No comments: 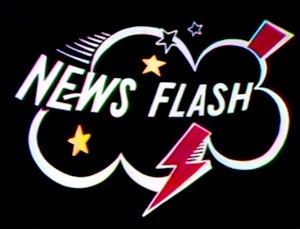 We take you now to the scene of a fast-breaking Canoga Park Quilt News Flash!


Police on Thursday sought everybodeee’s help to find your lovable old pal Grover from “Sesame Street” who was recently spotted on the bicycle and jogging path that runs parallel to Canoga Avenue.

The popular Muppet was in town to promote a new Little Golden Book, “The Monster At the End Of This Bike Path.”
One woman told police she saw him far away, and then close up. Conversely, at least two other women insist that he was very near, and then seen at quite a distance away.

“This falls in line with what we know about Grover, who has taught generations of children the concept of near and far, among other things,” notes Dr. Morris Detzer, professor of early education studies, from his office at Pierce College Winnetka.

Police are concerned that the furry blue monster could cause injury both to himself and others if he tries crossing the oft-busy bike path somehow carrying both ends of a very long ladder. Also his Mommy is worried about him.

Correction: Turns out the police are looking for a groper, not Grover. We regret the error.
at 12:27 PM No comments: