DATELINE: HONORING THE MEMORY OF THOSE WHO'VE SERVED THROUGH REMEMBERING AND HONORING THEM!

Not by a long shot: Today was our Memorial Day Parade, and all of the above was just part of the fun! Well, except for the misbehaving and unsupervised children and their clueless parents crowding our army of photographers as they tried to professionally do their job, but after all, this is Canoga Park — what did we expect from such a gregarious, hands-on community?  We love you, Canoga Parkians!

And by the way — what a parade it was! 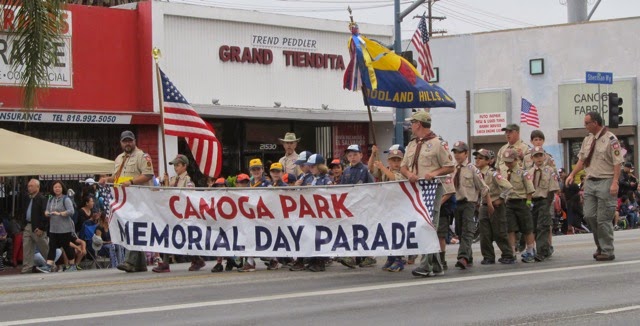 Did You Know?™ Today's was Canoga Park's 26th Annual Memorial Day Parade. The parade started in 1989 as a means for the City of Los Angeles Department of Public Health to get area residents out of their homes for a few hours so exterminators could go in and mass-fumigate all residential structures for pests, since Canoga Park was then facing an unprecedented carpet beetle infestation that the City Council was terrified was going to spread to the nicer parts of Winnetka and expand exponentially from there. Hollywood legend and former Woodland Hills resident Herb Edelman — you'll remember him as Dorothy's ex-husband Stan on "Golden Girls" — did his part by acting as the parade's first grand marshall.

Since then the parade has grown by leaps and bounds, getting bigger and better every year. As for the carpet beetles, they're one thing on Memorial Day we'd like to forget!
Oh, there's more! Click on them all — that is, unless you hate America!

Correction: Herb Edelman was not the parade's first grand marshall, although there is no evidence to suggest he did not maybe attend the parade, or was not inconvenienced by parade-related traffic and street closures. We regret the error.
at 1:30 PM No comments:

Did You Know?™ For this, the parade's 26th year, the theme "Saluting the Cost of Freedom" was chosen from over 14 different suggestions.

"Oh, yeah, there was 'Honoring Those Who Served,' 'A Tribute To Our Veterans,' 'Canoga Park Remembers,' 'Freedom Isn't Free,' and a bunch of others," says Murla Havemeyer, head of Parade Organizement for the Canoga Park Friendly Neighborhood Council. "Lots of 'Honoring' and 'Remembering' and, uh, I think 'Freedom' came up in a lot of them, too. It's kind of hard to get away from some of those words, but then, you really don't want to. I mean, it's a Memorial Day parade, for God's sake."

Eventually a committee whittled it down to "something in the area" of what was ultimately used.

But, notes Havemeyer, it wasn't easy: "A few of our members really went around and around on it for a while. This one insisted on 'the cost of freedom,' someone else — I think it was Jim — wanted 'the price of freedom.' Neither side would budge. Finally Coco's was closing and we had to figure out something. So we flipped a coin."

Oh, there's more! Click on them all — that is, unless you hate America!

Did you know?™ Before the parade began, spectators were treated to a stirring rendition of God Bless America, as well as some brief speeches, rousing audience warm-up and a few announcements, from the starting point of the parade at Owensmouth and Sherman Way. One such announcement pleaded with the audience to please stay off of the street and on the sidewalk for safety and so that everyone could enjoy the passing show.

There are, of course, exceptions to every rule: Parade vendors, hander-outers of free political combs and religious postcards, and unwashed drifters in their late 20s riding bicycles against the flow of the parade were among those not affected by this pronouncement. 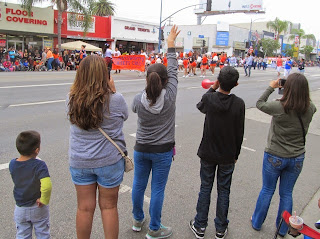 Visiting dignitaries, too, were afforded wider latitude and not held to the same standard as locals, such as this family of ambassadors from an area northeast of Canoga Park, who came to applaud the Chatsworth Chiefs Cheerleading squad, and held court well beyond the edge of the sidewalk, blocking the view for all behind them, but offering those same spectators a marvelous demonstration of the cultures and behavior of nearby communities. Diplomatic protocol granted them complete immunity from confinement to their chairs or the curb like everyone else — and Canoga Park is all the richer for it. Hey, thanks for coming!

Oh, there's more! You don't have to click on them all, but maybe you should think about what it would be like living in a country where you don't have the freedom to click on anything you like. Or worse, Reseda.

DATELINE: OVER HILL, OVER DALE, AS WE HIT THE DUSTY TRAIL!

We now return to our extensive coverage of the 26th Annual Canoga Park Memorial Day Parade, sponsored in part by Vallarta Supermarkets — the low-price leader for colorful yet remarkably bland oversized cookies shaped like slices of watermelon and sold individually out of a lucite bin, and also by your neighborhood Arby's — Arby's: We Have the Meats™.

There will be no further interruptions.

Did You Know?™ The Memorial Day Parade marks the official start of the Noise Season in Canoga Park, known for its traditional summertime events such as illegal fireworks randomly being set off in the middle of the street at all hours of the night, outdoor parties surprisingly scheduled for Sunday evenings and featuring live bands with seemingly endless stamina, and the Cohasset 500, where a single roaring, screeching car whips around a one-block route (Valerio to Jordan to Cohasset to Vassar), as fast and as many times as possible before running down a pedestrian, careening into a home or utility pole, or spotting a police vehicle.  The fun continues all summer long with these and other noise-related activities — and with the unusually hotter weather we've been enjoying these last few years, possibly well into the autumn months.

Did You Know?™ Traditionally, the Canoga Park Memorial Day Parade ends with the Los Angeles Fire Department bringing up the rear. Crowds love the spectacle the mere presence the bright red fire engines bring, but more importantly, the trucks serve a practical purpose as well: Crowds disperse quicker and easier with the threat of firefighters ready to turn the fire hoses on these spectators, many of whom have no place to go and would otherwise mill around endlessly and soon start some kind of trouble without the distraction of gaily decorated vehicles and marching bands to otherwise occupy their attention.

It was wonderful to meet so many of our readers at the Official Canoga Park Quilt Memorial Day Parade Headquarters today. And our thanks of course to the good folks at Godfather, the Gentlemen's Club for being our official parade hosts by allowing us to set up our economy pop-up canopy on the sidewalk in front of their establishment — as well as for all the hospitality they showed to us inside, after the parade was over. Why, our own Ingomar Schoenborn can't stop talking about it!

Happy Memorial Day to you, Canoga Park, and our sincere thanks to all those who have served.
at 1:27 PM No comments: