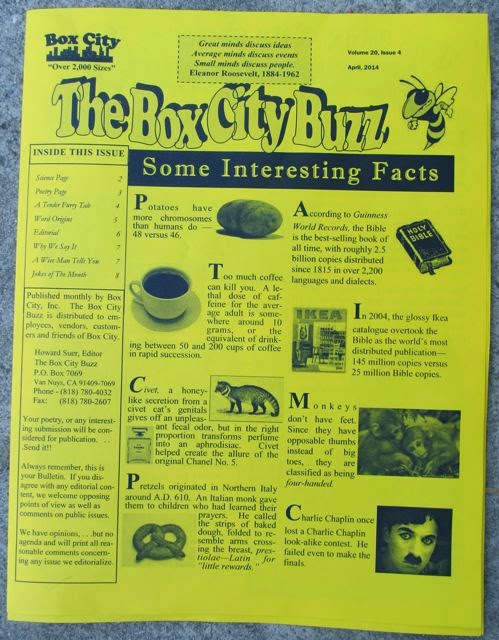 CPFNC Rejects Secession Proposal from Box City
The Canoga Park Friendly Neighborhood Council voted 18-2, with 3 members abstaining, against ratifying local business leader Box City’s proposal to secede from Canoga Park and become its own municipality, to be known as “Box City.” Known for its wide selection of cardboard boxes, packing, shipping and moving supplies as well as its friendly, helpful employees, Box City is located on Topanga Canyon Boulevard at Hart Street, in the bustling Harpanga business district. Rumors of a push for secession had been brewing for years since the retailer already prints its own newspaper, The Box City Buzz, featuring extremely localized coverage.

Dry, Windy Weather Good For Nose Picking
The Santa Ana winds buffeting Canoga Park and the extreme heat the West Valley is currently experiencing are ideal conditions for those who enjoy picking their noses, says Dr. Morris Detzer, chief rhinologist in the Department of Otolaryngology at Pierce College Winnetka. “The heat, the wind - this is the perfect storm as far as picking your nose is concerned. You’re going to find dry conditions up there, but your efforts will be surprisingly productive.” Best times for nose-picking will be in the morning upon waking up and when you’re driving and you don’t think anyone is looking at you, he says.

Sherman Way at Canoga Avenue Officially Named “Canoga Park Clusterfuck”
Though it’s been a while in coming, the dream of a group of civic-minded Canoga Parkians became a reality today when an approximately four block-long section of Sherman Way was officially recognized as “The Canoga Park Clusterfuck,” following a spirited petition campaign begun shortly after the Orange Line Extension opened in 2012. The newly-christened area - which begins at Sherman Way just before Milwood and extends west beyond Remmet - encompasses countless traffic signals, MTA red light cameras, a vaguely marked, mid-block, button-activated pedestrian crosswalk, and, most significantly, a north/south crossing of the Orange Line Extension, all which contribute to slowing traffic to a crawl on Sherman Way, Canoga Avenue, and any number of nearby feeder streets. The event was to be marked by a small ceremony, however members of the Canoga Park Friendly Neighborhood Council were unable to reach the intersection due to severe traffic congestion.

Image of Virgin Mary Seen In Local Pile Of Sand
The faithful and the curious alike flocked to the corner of Vassar and Valerio in Canoga Park’s tight knit Vassalerio neighborhood from as far away as Roscoe Boulevard to witness what many say was a miracle: the face of the Blessed Mother appearing in the famous Canoga Park Sand Mound this morning. While a number of those who made the pilgrimage to the site insist they were in the presence of Divine Majesty, there were others who were unable to see any resemblance to the Virgin Mary at all. “I fink it wooks wike Snuffleupagus,” mentioned one young visitor who then clambered over the sand pile, replacing the image with the imprint of the bottom of his Pro-Ked sneaker as he dashed across the street to school. Most were devastated by the obliteration of the original image, but others found solace in the fact that if they looked at it just right, the new impression looked like Jesus twerking.
at 11:00 AM