'A Taste of Canoga Park' Extended Through June 5

If you’re one of the many Canoga Parkians with a hankerin’ hunger that can only be satisfied by a bag filled with crunchy wagon wheels tied to the handle of a homemade pushcart, good news: Due to its immense popularity, “A Taste of Canoga Park” is being held over again.

The outdoor celebration of food, fun and incessantly honking vehicles has been extended and will continue to take place each regular weekday, on the west side of Vassar Avenue between Cohasset and Valerio in the tight knit Vasshassalerio neighborhood. The crowd-pleasing event, which coincidentally begins when the school day ends, is scheduled to run through June 5th just outside the gates of Canoga Park Elementary School.

“And by ‘just outside the gates, we mean just outside the gates,’” laughs Judy Maxwell, first grade teacher at the school where 91% of the students qualify for free or reduced lunches. “The school yard’s here, there’s the chain link fence surrounding the school yard, and then right on the other side of the fence, that’s where you’ll find the carts, riiight there on the sidewalk.”

Friendly food vendors, who often number a half-dozen or more (“With more planned!” smiles Maxwell), offer everything from fun ice cream novelties to ice-cold soda pop to über-trendy roasted-corn-cob-on-a-stick or kukurika, selling their wares to eager young "foodies" directly outside the grade school - itself a participant of LAUSD’s “Breakfast in the Classroom," the groundbreaking program helping proud but impoverished parents who are unable to afford or simply can’t be bothered to feed their children breakfast at home.

“Oh, this is great for the kids - they love it,” says Evie Speriglio, surveying the carnival-like scene from the driver’s seat of her 2014 Chevy Suburban while cradling a 20-ounce bottle of Mountain Dew between her thighs and alternating between licks of a Drumstick ice cream cone and handfuls of Funyuns. “But where the hell is that kid?” she wonders aloud, scanning the bustling crowd for her daughter Mary. “I need to get home. Steve Harvey’s on in fifteen minutes!” 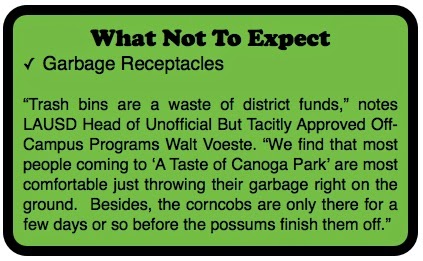 And when it’s all over June fifth? Don’t worry, “A Taste of Canoga Park” is scheduled to return to the area in August, coinciding with the start of the 2014-15 school year.


Nearly finished with her ice cream cone, Evie finally spots seven year-old Mary, who herself had been peering down the long queue of enormous, late model SUVs that line the street each day during “Taste,” searching for the one her Mom drives.

“Mary! Go get your teacher!” mother barks as daughter approaches, before explaining to the Quilt, “I got another one coming here next fall and I need to find out how to sign him up for free lunch, too.”

“Can I get some money for cotton candy?” asks Mary, glancing hopefully at the man working his way through the crowded sidewalk carrying a “tree” loaded with bags of pink and blue spun sugar floss, ready to be plucked for those with a sweet tooth and extra pocket money to spend.

“Yes, but find your damn teacher first and bring her here!  I’m not getting out of the car again - this asshole’s trying to take my space.”

“I’m just trying to get in my driveway,” the driver of a beat-up old sedan explains. “I live here and I’d like to go home.”

A Taste of Canoga Park is held Monday, Wednesday, Thursday and Friday beginning at 2:24 p.m. and on Tuesdays beginning at 1:24 p.m. The event lasts for as long as there are customers.  To sign up for free or reduced school meals, you can apply at http://cafe-la.lausd.net/new-online_meal_application
at 10:30 AM