What more can we say (other than ‘thank you for your service’) after having covered the Canoga Park Memorial Day Parade for a whopping four years now? You can only take so many pictures of the world famous Chatsworth Pooping Stallions and every talented West Valley high school marching band before they all begin to run together and even the most brilliant journalists hit a dry spell.

[Or could it be that it's understandably difficult coming up with fresh material when covering almost the exact same parade year after year after year...?]

So forgive us if we’re a little light on the commentary this year; the sun was hot and the entire photography department was hung over. Plus, much like many of our local strip clubs, there's no assigned seating with the High Rollers Parade-Sponsor Gazebo — you get up to pee, you're losing that space in the front row! (Next year, we're bringing an empty mayonnaise jar.)

Eh, on with the pictures. Those of you who purchased VIP wristbands can click on the photos to see them larger, though probably in no greater detail.

Hey, a brand new banner this year!
The last three (at least) they'd used one without the date. Can't use this one again! 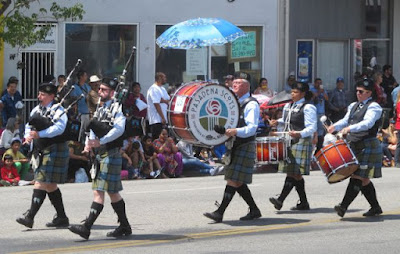 The Pasadena Scottish Pipes & Drums numbered less this year than they have in the past, but thankfully, whether you've got twenty bagpipes or just two, they're still loud. 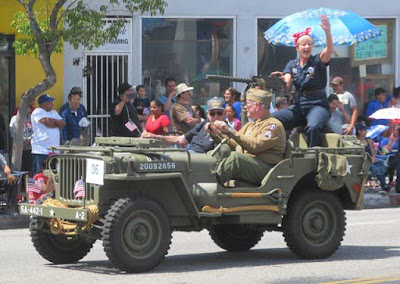 Rosie the Riveter waves to the crowd. 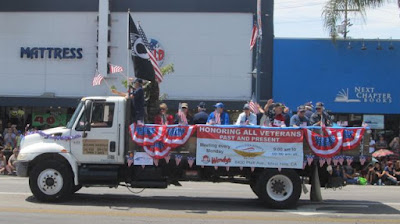 Some of the Wings Over Wendy's regulars! There were two trucks of 'em! 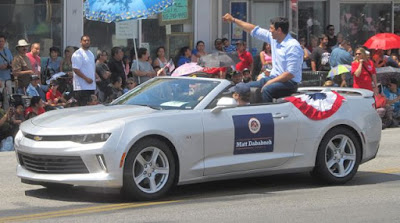 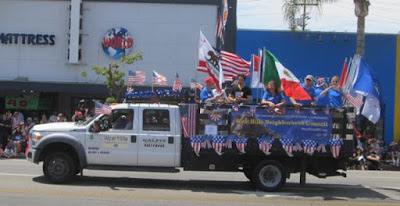 The West Hills Neighborhood Council!
Did You Know...?™ While today the WHNC truck is carrying council members waving a collection of flags, it can be converted in moments to accommodate an angry mob wielding pitchforks and torches to run off any would be burglars, mail thieves and porch pirates that have recently infested the West Hills area.

Together again for the first time in over half a century, it's the cast of 1965 NBC sitcom "Camp Runamuck," and gee whiz, the kids haven't aged a bit! The show aired for a single season and—  ...What's that? Oops! Apparently this is a local Boy Scout troop. We regret the error. 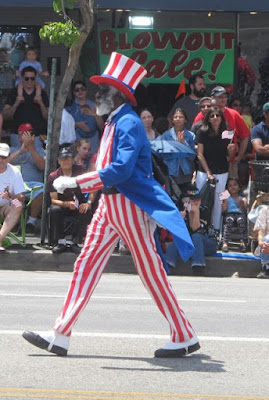 Though introduced as "Mr. Patriot," he'll always be Uncle Sam to us.
He lead the Liberty Tax dancers... 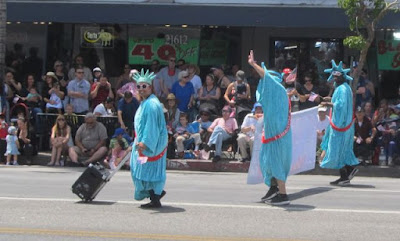 ...and this photo does not do justice to their assorted cavortments and frolications, which they performed with not just abandon, but with gleeful, merry abandon.
Memo to the Canoga Park Friendly Neighborhood Council: These guys were great last year and even better this year. Bring 'em back again next year. They know how to par-ade! 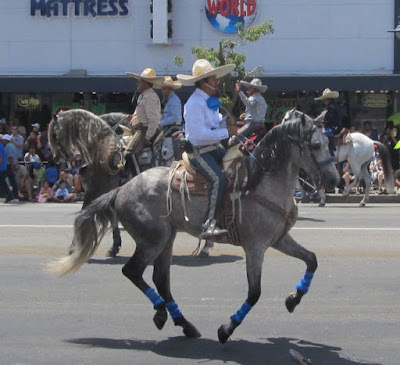 This horse & rider were tearing up and down Sherman Way like one of the countless street racers that have made the roads of Canoga Park famous, except with a lot less noise and no danger to anyone else on the road or to pedestrians. And no one in the crowd was hoping he'd crash his horse and perish in a fiery explosion, either.

The last time there were this many horses on Sherman Way was back in 1962, shortly before automobiles made their way to the West Valley. 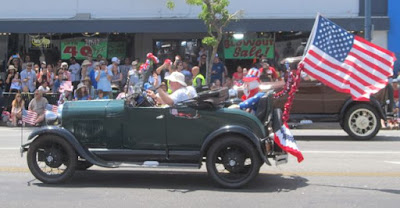 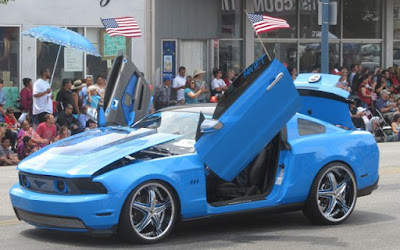 Speaking of the future... 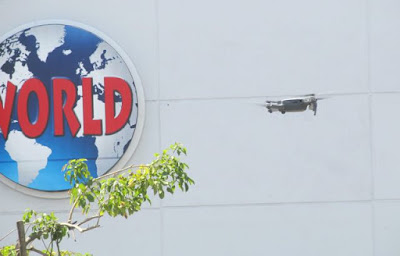 ...a UFO monitoring the parade route? No, it's a drone, or unmanned photographamical airship, shown here alongside a satellite image of the earth for scale. 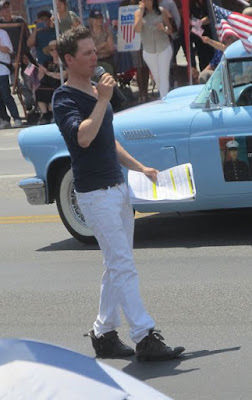 Our parade M.C., or emcee, Rob (?) ...Something-or-Other. Truly a master of masters of ceremonies, he kept up a steady stream of not only peppy parade patter, but peppy pre-parade patter as eager crowds wilted waited for it to start — never once becoming distracted by unauthorized non-parade jackasses riding their bikes right by him on the parade route. Lesser men would have been tempted to jam a handy broomstick into the spokes of the passing offenders. Note to staff: Next year bring broomsticks to parade (in addition to mayonnaise jars). 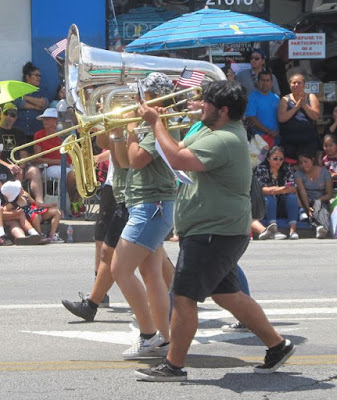 Give it up for this Dixieland Jazz Band from one of our local high schools! 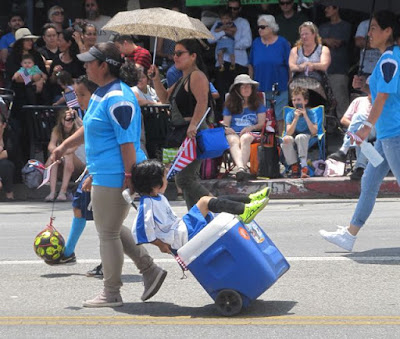 "Nothing's Cooler Than Honoring Our Troops" is the theme of this year's float from the Coleman Company. Constructed of high-impact styrene, this 60-quart wheeled cooler can hold up to ninety soda or beer cans and one small child and is powered entirely by someone's mother.

That's all she wrote, folks. That's it. Parade's over.
Nothing to see here. Break it up! On your way! Move along now!