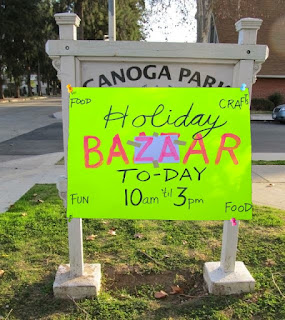 The Canoga Park First Wednesday of the Month Women’s Club held their annual Holiday Bazaar and Back Pain Pill Exchange this past Saturday, November 14 at their clubhouse on Jordan Avenue. The event featured a myriad of delightful hand-woven pot holders, macramé owls, construction paper ornaments with oversized yarn stitching, peanut butter and birdseed encrusted pinecone bird feeders, wooden clothespins decorated to resemble reindeer, as well as other handcrafted items, baked goods and house plants, all for sale to the public.

Business was brisk from the moment the bazaar opened at ten a.m., reports Myrtle Hipkins, Vice President In Charge of Gluing Felt Antlers to Walnut Shells. “Oh, we’ve been busy all morning. My daughter came with my grandson, and then, well, she even came back a little while later to pick him up after her Zumba class, and I saw Irene’s daughter-in-law here, and ooh, Louise’s daughter came by — with her niece who is going to have a baby! — and Helen’s daughter, she was here, and, um, oh yes, that nice woman who drives Sylvia to the doctor was here — Sylvia! What’s that gal’s name?  The one who drives you to your podiatrist? ‘Dr. Cohen’?! No, no, the girl who drives you there! Aaah—!”
Spread across the Official Bake Sale Card Table (back with all four legs this year) was a host of delicious goodies atop a festive green and red paper tablecloth featuring the popular Teenage Mutant Ninja Turtles characters.
Generally ovoid pfeffernüsse cookies of wildly varying sizes wrapped up in cellophane and baggies of fudge squares melded back together into a clumped cube of rich, nutty sweetness vied for tabletop real estate alongside tightly wrapped cupcakes on small paper plates — two treats in one for a lucky tot: delicious devil’s food as well as icing to be sucked off the Saran Wrap. A cadre of sweet-smelling gingerbread men — including one with a metal eyelet protruding from the top of his head and marked “Hallmark Keepsake” on his side — fell quickly to the advancing troops of hungry customers, who, armed with nickels and dimes, made quick work of them until a call went up not of “Victory!” but for the number of an emergency dentist.

Trivets made of recycled popsicles sticks were a popular seller over at the station manned by Esther Wheeling, the club’s Vice-President In Charge of Recycling Popsicle Sticks. “I sold both of the ones I made,” the proud octagenarian beamed. “I guess my daughter really liked how I spelled out  ‘Ho Ho Ho’ in glitter on them.”
Meanwhile, at “Plants ‘N Such,” a long folding table with flora for sale, the Club’s resident gardener Flossie Brown, 87, surveyed her wares, each ready to take home in its own Dixie cup. “Those are spider plants,” she told interested shoppers. “They’re two for a quarter. Oh, they’ll just grow and grow. Over here, I’ve got some pothos cuttings. Now these are 35¢. If you want to really see something — but it’s not for sale — I brought my prize-winning African violet from home. ...Wait, where is it? Vera!  You didn’t sell my African violet when I was using the lady’s room, did you?!”

A steady stream of shoppers visited the bazaar throughout the day, including Ronald Saxe, currently living across the street in an RV, who was almost as thrilled with his 10¢ purchase of a snowman made of two styrofoam balls, three sequins and some felt scraps as he was by the opportunity to use an indoor toilet. Brian Rauschebart of De Soto Avenue dropped by with his girlfriend Sarah, the granddaughter of a Club member. “I’m looking at this Christmas tree and it’s made from a folded up magazine...?" the 28-year-old explains as he arranges his oversized marled black cable knit scarf just-so.
"And I see it’s an issue of ‘Outdoor Life’ from 1952. Oh my God — I was so stunned I almost forgot about the nickel change I had coming from the dime I paid.”

The three p.m. closing time couldn’t have come a moment too soon: Most of the bazaar’s goods were by then sold out to eager family members — good thing, too, due to limited room on the Senior Shuttle that had come to deliver the club members to Coco’s for dinner. When the dust had settled, the 101-year-old stalwart Canoga Park organization had cleared nearly $11 in profit. “Not too shabby for a bunch of ‘old ladies,’ huh?” laughed Opal Wilson, 97.


“Okay, everyone, on the bus,” bellowed Ladies Club Vice-President in Charge of Neighborhood Cacophony Doreen Farber, as she kicked an unsold piggy bank fashioned from an empty Clorox bottle out of the path of a man rolling in an enormous audio speaker on a hand truck. “These people just paid us seven hundred bucks for the facilities for the evening, so let’s get out of their way.”
Special thanks to Janet's husband's second cousin — the one who moved to Florida — whose son, who still lives out here, was nice enough to take photographs of items from the event, and did you know Janet once went to New York and she saw that woman from the Today Show when she went to see 'Wicked' with Bob. Oh, for goodness sake, you know who I'm talking about, she was on the Today Show, oh, forever, but I don't think she's been on for some time now and...
at 9:17 AM