Here's what's doin' on and around Halloween — this year scheduled for October 31st — in Canoga Park.

Trunk or Treat
Many local churches will be hosting "Trunk or Treat" events for the little ones — parking lots full of cars with adults handing out treats to good little ghosts and goblins from the backs of their spookily-decorated vehicles. Additionally, some event sites will also feature vendors selling pre-heated, foil-wrapped, ready-to-eat 'street' food — prepared off-site with varying degrees of safe food-handling procedures — out of coolers from their trunks, while other locations will have trunk-salespeople offering a selection of electronics that have "fallen off a truck." At a few select venues, parents will enjoy perusing a wide variety of books, CDs, DVDs, and other items available for purchase and still sealed in their Amazon Prime boxes featuring West Hills addresses. Saturday afternoon to evening, various times & locations. Check your local place of worship for details.

West Valley Spooky Historical Lecture
Renowned local CanogaParkologist, Bob Farrell of the Owensmouth/Canoga Historical League, will deliver a lecture titled "Canoga Park Legend & Lore," a Halloween-themed talk about the area's oft-spooky history, myths and urban legends — including the tale of the infamous Women's Club Lodgepole Pine, the tree rumored to have originally grown as straight as an arrow for decades but eventually taking on an increasingly gnarled, twisted and grotesque shape with each transgression the Canoga Park First Wednesday of the Month Women's Club commits upon the once peaceful surrounding neighborhood. Saturday evening, 8 p.m., Museum of the West Valley, 21606 Nordhoff Street, Canoga Park

Pit Bull Apologist Group Hosts Halloween "Pittie" Party
PARGA, Pitbulls Are Really Gentle Animals, is hosting a Halloween "Pittie" Party, and invites local pit bull owners to dress up their "pitties" in fun costumes and bring them along. Club president Dawn Haberlind is hosting the event at her home, and requests a nominal $5 donation to help defray the cost of refreshments, with any funds left over going towards paying a personal injury settlement from a lawsuit won by "the greedy parents of some little girl selling cookies or something who startled my sweet wittle pittie Marauder by thoughtlessly ringing the doorbell." PARGA, Haberlind Residence, 8534 Eton Avenue, Saturday 5 pm - 10 pm. 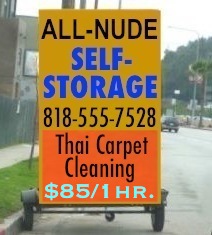 LAPD Topanga Division Announces Local Halloween Contest
The Los Angeles Police Department's Topanga Division has announced the "Use Your Head And For God's Sake Don't Do Anything Stupid Just Because Halloween Falls On A Saturday Night This Year" contest, according to the LAPD West Valley Public Relations Support Officer In Charge of Press Releases, Reed N. Malloy. "We've already got our hands full on most Saturday nights around here, so for God's sake, with all the kids out on Halloween and everything else, just do everyone a favor and don't do anything stupid," says Malloy. The station is prepared to award hundreds of prizes, which include the acts of not being cited with a traffic violation, not going to jail, not being rushed to the emergency room, and even not ending up in the morgue — all simply by using basic intelligence, avoiding aggressive, drunken asshole behavior, and perhaps most difficult to many Los Angeles residents, showing common courtesy to others — even those you may not know. "We consider everyone who doesn't do anything stupid on Halloween a real Grand Prize winner," he adds. Topanga Division Halloween Contest, now through approximately 5 am Sunday November 1st, Canoga Park and surrounding area. All prizes are intangible concepts and non-transferable. 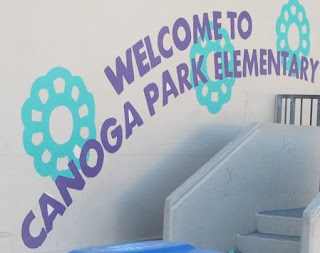 Canoga Park Elementary To Hold Costume Dance Party
"Monster Mash" and "Love Potion Number 9," two perennial favorites of students, teachers and residents living within a quarter-mile of Canoga Park Elementary will not be heard broadcast over Ol' Blarey, the school's famous window-rattling, 128 dB public announcement system retrofitted from a World War II surplus air raid siren during Friday afternoon's after-school Halloween costume & dance party. "This year we were delighted to get DJ Noyze Ordnintz whose — let me get this right — baby mama's first baby daddy's third baby mama has a student here. I think that's correct. Anyway, he's doing the music and he's got a completely different playlist than our usual one," says Judy Maxwell, a teacher's aide with the school. "Rae Sremmurd, Li'l Wayne, Rick Ross, like that. It should be fun." Adds Principal Frank Guinto, on the way to his car, "After school hours, folks. After school hours. I have nothing whatsoever to do with any of this." Canoga Park Elementary Courtyard, Vassar between Cohasset and Valerio, Friday, 3-5 pm.

Día De Los Muertos Festival Joins Forces With CicLAvia
Canoga Park's 15th Annual Día de Los Muertos Festival, or street fair, joins forces with popular bicycle event "CicLAvia" on Sunday November 1st. "It was a no-brainer," reports Murla Havemyer, head of Event Organizement with the Canoga Park Friendly Neighborhood Council. "They like having the streets closed for those bicycle things, and it turns out we're closing Sherman Way from Topanga Canyon Boulevard to Canoga for Día de Los Muertos anyway, you know, to make room for all the booths, artists, dancers, vendors, pedestrians and wall-to-wall classic cars, so it just makes sense to combine the two." Sunday November 1, 10 am to 5 pm, Sherman Way.

•  •  •  •  •  •  •  •  •
If you have a Halloween event for the Canoga Park area you'd like to have included here, well, you're a little bit late, aren't you? Tell you what — we'll post it during the Thanksgiving rundown of community events instead and maybe next year you'll remember to get these things in on time, hmm?
at 6:55 AM