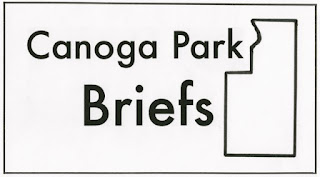 A local round-up of news, condensed for quick digestion,
not unlike an off-brand soup from Dollar Tree.

Salvation Army Offers Hallowe’en Decor & More
Ghosts and goblins are haunting the aisles of the Canoga Park location of Salvation Army as the thrift store offers up Hallowe’en items for sale for the upcoming holiday (this year falling on the last day of the month). “We do have a number of costumes an’ punkins an’ decorations for your trick-or-treat,” notes Salvation Army donation intake coordinator Trenice Campbell. “There was even a little fairy-princess outfit on this rack I saw this morning, if your girl want to maybe go out as a fairy-princess for her trick-or-treat. ...Nope, it’s gone, I guess someone bought it! Ha! You gotta be fast around here! Ha! Well, we got other costumes an’ whatnot.” Salvation Army Family Store, 21381 Roscoe Blvd. Open Monday—Saturday. 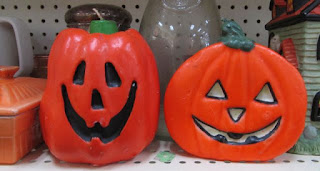 Goodwill Offers Decor & More for Hallowe’en
Witches and warlocks are creeping the aisles of the Canoga Park location of Goodwill as the thrift store has opened what it calls its “Boo-tique,” (a funny take on the word “boutique”) and stocked it with Hallowe’en items galore, from bats to rats (thankfully not real), and everything in between. “There was totally like a full-on gorilla costume here last week that was f_cking insane!” notes Goodwill shopper Brian Rauschebart. “I was going to get it but I made myself promise this year to focus on vintage Beistle...? Yeeeah. That and the Todd Masters 'Oh Lantern' family of foam pumpkins from the 1980s but they are like suuuper-hard to find.” Goodwill Industries, 7107 Owensmouth Avenue. Open 7 days a week.

Plumbing City Reaches Bittersweet Milestone With ‘Happy Holiday’ Sign
Local business leader Plumbing City on Canoga Avenue have officially passed the point where taking down their sign wishing customers and passersby alike a “Happy Holiday” before having to put it back up again makes any sense from a practical standpoint. “Technically, they probably blew past the point of no return with that in June,” notes Canoga Park Chamber of Commerce spokesperson Bernice Solverson. “But the missing H from ‘have’ gives it a nice sort of Dickensian touch, so we didn’t cite them.”

Correction:
In “Correction to ‘Village at Topanga Grand Opening Brings Out Canoga Park Residents in Droves,’” (October 23), we mentioned that “A pitbull was in attendance.”  The sentence should have read “Many pitbulls were in attendance.” We regret the error.
at 3:41 PM