REPORT: Topanga Canyon Boulevard Caldera Could Blow ‘At Any Time’

A seismologist at Pierce College Winnetka issued a rare alert today that there is increasing evidence that the mini-supervolcano beneath Sherman Way and Topanga Canyon Boulevard, in the tight-knit Shermanga business district, may be closer to erupting than had been previously thought, due to shifts in tectonic plates caused by recent earthquakes here in Southern California.

“This particular A.C.T., or asphalt camel toe, has been pushing upward for quite a while. We’ve been aware of it for a few years now and have been monitoring its growth,” remarked Dr. Morris Detzer, professor of dendrology “and also, as it turns out, of seismology” at the nearby campus.

The elongated, cleaved lump is located near the middle of the crosswalk on the inner westbound lane of Sherman Way at Topanga Canyon Boulevard. “It keeps pushing up. It’s gotten to the point that a number of my students who drive low-riders — and one gal who has a SmartCar for some reason — are now reporting to me that they’re scraping the bottoms of their chassis on it. It could erupt tomorrow or a thousand years from now. But it's definitely getting larger and by the data I’m seeing, it’s going to be sooner rather than later.”

Detzer faces an uphill battle combating misinformation and myths regarding the caldera. Perhaps most vexing to him is that many locals aren’t even aware of exactly what it is.

“I’ve heard people tell me that it’s the root system of a tree. Look around. What tree? There’s no trees around there!” he laughs.

Passersby, though aware of the vulvic-shaped swelling, seemed unsure what to make of it.

“Holy sh_t, yeah, what the f_ck is that thing?” wondered Alex Ruskin who surveyed the scene from the sidewalk on his way to play some nine-ball at Canoga Billiards. “Man, I always trip over that sh_t when I'm crossing the street an' sh_t. And it keeps getting bigger an’ sh_t, like every time I drive over it. Someone told me that once they was paving the street an’ sh_t...? And a old lady was crossing the street an’ sh_t...? And they just paved over her an’ now she’s coming back, like for her revenge. An’ sh_t.”

Wildly varying theories abounded as well on the “Open Lines” segment of last night’s popular “Coast to Coast A.M.” radio program, heard locally on station KFI 640 AM. Genial host George Noory indulged a wide range of callers some of whom suggested that Jimmy Hoffa may be buried beneath Sherman Way, that a War-of-the-Worlds alien tripod is in the ground incubating and could bust out any minute to destroy all humanity, or perhaps most far-fetched, that it’s proof of LA’s deteriorating system of public roads and antiquated water mains. It was a split show, so then later C2C favorite Whitley Streiber was on to chat about his latest book.

“It’s never a good thing when a mound like this begins to swell. One tell-tale sign of impending danger is that the bulge will start to look like some jackass’s rushed, amateurish attempt at using a free online photo editor.  But the danger is real,” insists Metzer. “My gardener cracked the rear axle housing of his Chevy pickup on it and he can’t get over here to mow my lawn until it’s fixed. We were supposed to have people over for a spring barbecue in the backyard this weekend. Can't do that now.”

Adding credence to the possibility of an impending eruption have been accounts that possums have been seen fleeing Canoga Park in droves - leaving a virtual bounty of feral cat feces uneaten - though these reports remain unconfirmed at this time.

A rumbling heard in the vicinity over the weekend may be further indication of the mini-supervolcano’s imminent eruption. Since it may have merely been music emanating from the open doors of the Canoga Park First-Wednesday-of-the-Month Women’s Club five blocks away, it can’t be determined definitively whether it was the roar of magma churning beneath the street’s surface or the usual weekly boisterous wedding reception/free-for-all. Update: Nearby residents report it was not the Canoga Park First-Wednesday-of-the-Month Women's Club, which actually had their back doors closed this weekend. Local spiritual leaders see this unexplained phenomenon and uncharacteristic show of consideration as yet another sign of the coming apocalypse. But the neighbors were grateful.

An eruption of the Topanga Caldera would, indeed, be catastrophic. “Everything from Jolly Donuts all the way to Super Dollar would likely be affected," says Canoga Park Chamber of Commerce spokesperson Mariel Coleman. "Thankfully, Arby’s is just out of the at-risk area.” 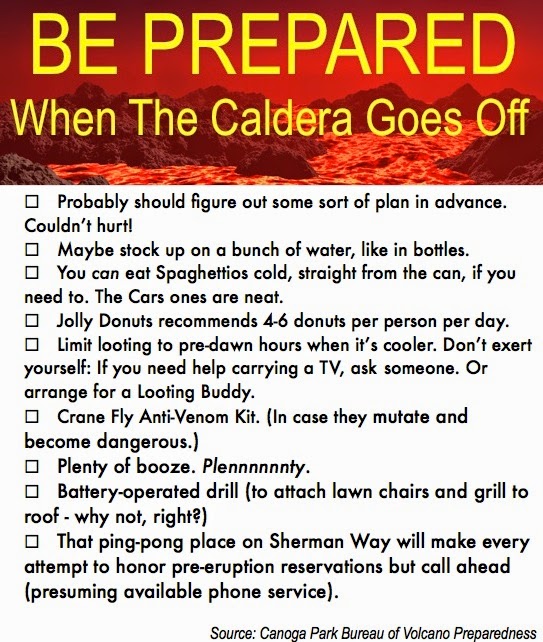 However, Bank of America, just a few yards from the potential Ground Zero, would be devastated. “The community has literally hundreds of dollars in our vaults,” notes bank manager Susan Mendez. “But don’t worry, we’re FDIC insured. And even if our ATMs were down for a few hours, I’ve authorized Benny, the fellow in our parking lot who sells frutas, or fruits, to extend credit to our customers.”

Canoga Park is no stranger to volcanic activity, although it’s been hundreds of years since the last major eruption in the area. Explains Bob Farrell of the Owensmouth - Canoga Historical Society, “The Canoga Indians are long gone, and sadly, so is their language. But most linguists agree that ‘Topanga’ was in fact their word for 'volcano,' although there those in the field whose research points to a different meaning - some texts define it as ‘crumbling municipal infrastructure.’”
at 9:15 AM