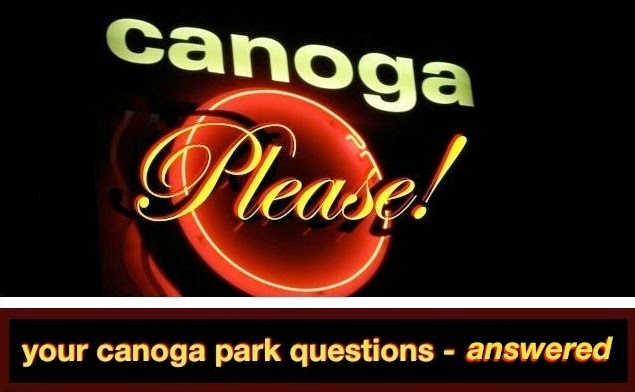 Congratulations to Jennifer R. of Baltar Street for her winning "Name Our New Feature" contest entry. She and her husband will be enjoying dinner for two on us at an exclusive Canoga Park restaurant. I'm thinkin' Arby's!

On with our inaugural column!

Canoga Please! What's the deal with that mound of sand at the southeast corner of Vassar and Valerio? --Russell B., Cohasset Street

We presumed this must be a recent development because this was news to us. So we sent a team of Canoga Park Quilt investigative reporters out to the corner of Vassar and Valerio, in the tight-knit Vassalerio neighborhood, to see exactly what Russell was referring to:

Our first thought: Since it was literally across the street from Canoga Park Elementary's Early Education Center, that perhaps due to LAUSD overcrowding, a new sandbox for the so-called undergifted children was to be installed here on the corner, in a well-intentioned but arguably misguided attempt to keep the less intellectual (but just as adorable!) small fry isolated and far away from any students showing potential. We reached out to Canoga Park Elementary staffer and friend of the Quilt Judy Maxwell who denied it had anything to do with the school.

Racking our brains, we came upon another possibility.  Sure, children like to play in sand - but not as much as cats like to crap in it. It seemed possible that the West Valley Animal Care Center, finding itself with an enormous surplus of funds, decided to help keep the area's feral cat population down by depositing sand treated with an expensive sterilization agent, developed in the West Valley Animal Care Center Laboratories ("We Don't Test On Animals, We Test For Animals!"), at various spots around the Canoga Park area.
We reached out to West Valley Animal Care Center's Chancellor of Feral Cats Shelly Blaine with our thoughts who replied it was "perhaps the stupidest thing [she'd] ever heard," that no such budget surplus exists nor has anyone invented any sort of cat-sterilizing chemical to spray on sand "and I don't know where you came up with this lab nonsense."

She also mentioned she'll be speaking to the LA City Council next week on an unrelated matter and "maybe I'll bring this Chemical Neuter Sand idea of yours up. Seems like the kind of thing they'd vote for. Hell, we could use the money."

Good for her, of course - but all this talk of feral cats was bringing us no closer to solving our mystery, and making us hungry. No time to eat - back to work!

Huge mound of sand, huge mound of sand, hmm...  Of course! Irradiated ants. We reached out to our research department back at Quilt headquarters and they looked into them, and by them, we of course mean the 1954 cult classic, "Them!"
Our suspicions seemed to be panning out: a quick IMDb search revealed that star Edmund Gwenn had in fact died in nearby Woodland Hills a mere fifty-four years before, officially from "pneumonia and complications from a stroke," but likely from giant ant-inflicted injuries. Is it possible that over the last half-century these monster ants have tunneled east, beneath Topanga, only to surface here and terrorize Canoga Parkians?

We reached out to Pierce College Winnetka professor of myrmecology Dr. Morris Detzer who unfortunately squashed, like a bug, what we considered a most promising hypothesis.

"Nope, the largest ants on earth today are only about three centimeters long. And fossils records indicate that even prehistoric ants didn't get much bigger than two and a quarter inches long.

One particularly interesting theory came from a nearby resident who happened to be walking down the street. We reached out to him and asked his opinion. "Canoga Park First-Wednesday-of-the-Month Women's Club - there's your culprit," nodded Téodor Pasternak definitively. "My guess is there was one of those old, concrete light posts here, and the intense vibrations of the pounding music pouring out of the club's back doors during this past Saturday night's weekly blowout caused it to disintegrate back into the individual grains of sand and pebbles it was made from."
Sounded reasonable to us - after all, the Canoga Park First-Wednesday-of-the-Month Women's Club is as well know for its marvelous inability to police its own premises during raucous events as it is for the magnificent work it's done for the community throughout the years. So we reached out to LA Department of Public Works - Bureau of Street Lights, Old Concrete Light Posts Division, to confirm that the thundering noise from the clubhouse could have reduced a nearby light pole to dust.

We spoke with department head Al Sousa who at first confirmed our suspicions: "Women's Club?  Party? Ludicrously oversized sound system? Tiny, uninsulated venue? Back doors open? Absolutely it could have done it. However..."

And with that 'however' we knew we were back to square one: Al then pointed out there was already an aluminum light pole on that corner and the only part of Canoga Park that ever had concrete light posts was the fancy section, "you know, up there by ooh-la-la Rodax Street," he said.
Yet another dead end.  Or was it?

Sousa said our inquiry gave him the perfect excuse to drive out to the West Valley, maybe grab some lunch ("Everyone knows, you want a good feral cat street taco, you go to Canoga Park. Hell, that's one of my favorite Huell Howser episodes," he later told us.) and check out the mound in person. After a hearty meal on Lanark Park's fashionable east side (in the bleachers), we headed back to Valerio and Vassar, where Al studied the strange phenomenon at length and finally announced that in his professional opinion, the sand was "probably just dumped by some asshole who wanted to get rid of it."

But, as Huell himself would say, our story does not end here! No sir, not by a long shot!

While contemplating the sand, he noticed something fascinating at this four-way-stop intersection: The cars heading south on Vassar as well as those crossing Valerio blew through the stop signs as usual (one nearly clipping Pasternak - who was determined to write an angry letter to someone about the experience).

However, cars driving north on Vassar slowed down considerably - some very nearly stopping! - as they approached the mound of sand, briefly prying their eyes off their smartphones to stare curiously at it.

Sousa put in a few calls and excitedly described his findings to colleagues in the Los Angeles Department of Traffic. While he's unable to comment publicly, the unofficial word from the an unnamed source (!) in Public Works is that we just might be seeing mysterious mounds of sand alongside many more largely ignored stop signs in the near future.
--Burton Cantara

Do you have a question about Canoga Park? Email it to us at CanogaPlease@gmail.com and it may be answered here. Questions may be edited for brevity or to accommodate photos we've been looking for an excuse to run. Sorry, due to the volume of mail we receive, we cannot respond to every inquiry.