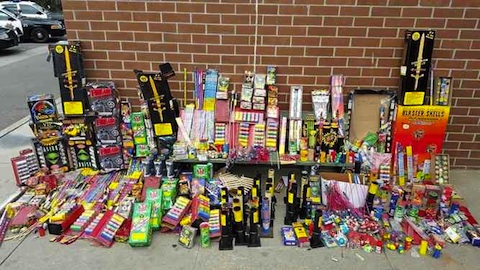 AS A PUBLIC SERVICE to our readers, we’d like to offer our recommendations for the best in illegal fireworks here in the West Valley. We’ve tested each one dozens of times — often after 2 a.m. and in various neighborhoods — and rated them on the following criteria:


Based on those scores we have rated the following fireworks, available from your favorite illegal fireworks dealer, as the best of the best.

Turn your neighborhood into a warzone with this 9-missile cluster. Light the fuse and watch the lights go on in houses down the street!

Owensmouth Explosion
Laffs galore when set up in the middle of that 4-way stop at Valerio! Potential for causing dangerous traffic accidents! Fun!

LA River Basin Reverberator
Powerful enough to shake loose the homeless folks from under the overpasses along the bikepath every time!

Solemnly remember Canoga Park’s legacy in the aerospace industry by giving those poor security guards something to do at 3 a.m. — chase after people old enough to know better — in underpowered golf carts!

Saticoy Salute
Shoots high into the air with a satisfying, spark-showering bang even if you can’t see the colorful explosion through all the dry, brittle leaves of the trees overhead!

Lanark Park Bombardment
160-shot repeater rains down lights, sparks and burnt paper casings everywhere! They'll be cleaning it out of the municipal pool through Labor Day!

Big Noise From Winnetka
Huge explosion accompanied by jazzy, whistling report! A delight for fans of both unnecessary noise and obscure references to 1940s songs!

Blowin’ Up Vanowen
Sends local cats under beds for weeks!  They won’t be coaxed out until the first week of August!

The Carnage At Topanga
Extra gunpowder plus extremely short fuses guarantee a trip to the emergency room for you & all bystanders within a blast radius of 15 feet. Tissue loss has never been so patriotic!

Roscoe Racket
Powerful enough to make even the largest dog breeds instantly lose large patches of fur from stress up to a half-mile away!

Corbin Calamity
Guaranteed to fly erratically and take out at least one eye!

DeSoto Detonation
Amputates thumb and cauterizes the wound in one loud bang!

No Sleep ‘Til Northridge
You don’t have to work tomorrow — what do you care about anyone else?

Reseda Ruckus
Fills the neighborhood with brief flashes of light, enormous noise, and noxious smoke that seems to hang in the air for hours!


• • • Remember, except for shows run by professional, licensed, permitted "pyrotechnicians" or fireworkologists, personal fireworks are illegal to own or set off in our little corner of Los Angeles County, can be extremely dangerous in a high density urban area such as ours, and cause untold amounts of frustration to people who actually work for a living and enormous distress to pets. However, this is the San Fernando Valley in 2017; civility was blown up and killed by a box of M-80s years ago (and it probably looked really cool) and thankfully we now live in an era where immature selfish entitlement reigns supreme.

What's more, by the time anyone complaining actually gets through LAPD’s non-emergency line and speaks with Dispatch, you’ll be long gone, probably off carving donuts into the pavement of Platt Avenue near Pomelo in West Hills!  • • •