Father's Day has imparted extra-special significance to an already amazing set of circumstances for a local family this year: A Canoga Park teen recently impregnated a pal's girlfriend within a few feet of where he was conceived roughly two decades ago — under the same tree, by the same garbage can and on the same blanket at Lanark Park — yet mother & son had no idea of the remarkable coincidence until a cousin, friends with both of them on Facebook, noticed similarities between the pictures they posted commemorating the events.

The ritual of fornicating on the ground in a public park, or parkschtupping, is well-known in the West Valley.

"Folks engaging in parkschtupping are a common sight in our local parks," says Dr. Morris Detzer, head of the Center for Sex & Sexy Studies at Pierce College Winnetka. "We see it all the time: Two people who are involved in other relationships will arrange a rendezvous in a public park, traditionally on a ratty old blanket. While it generally starts with clothed but inappropriate groping, one thing quickly leads to another, passions are set aflame, and before you know it, a bunch of 8-year-olds from a local youth soccer league playing nearby get an early lesson in human anatomy and reproduction. It's the circle of life."

Says soon-to-be absentee papa Radek Murta, 19, of his recent public hook-up, "We like went to the park an' shit 'cause my Mom was home an' shit, you know? I just f_ckin' grabbed this old, like, blanket off the couch an' shit so we had something to lay on, right? When we was doin' it, Valeska [his schtup partner] was all complainin' an' shit because she rolled off the blanket and onto some dog shit and then onto some broken glass, but I'm like 'shut uhhhp!' you know?" 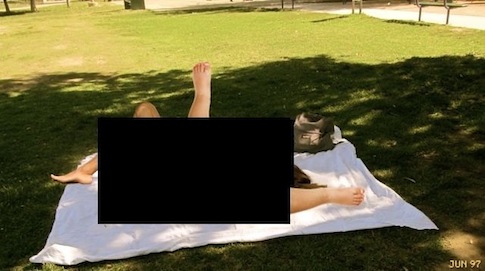 Above: Jana Murta in the act of conceiving her first son, Radek, in June of 1997 with "some married guy who like drove a truck for like the DWP," she remembers. "Holy shit, I had like good legs back then, right?"

Below: Radek Murta, Jana's son, on that same blanket last week, "with my homie's girl Valeska who works the graveyard shift at that strip club on Canoga an' shit." Based on the placement of the benches around the playground, it has been determined mother and son enjoyed illicit assignations within a few feet of one another — some 20 years apart. 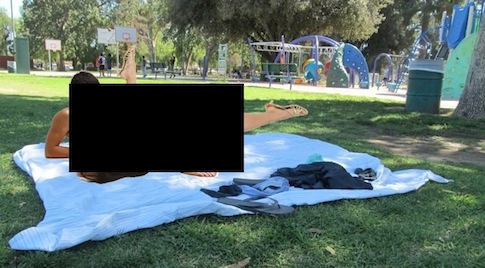 "Oh my gahhh!" says Jana as she compares the two pictures on Facebook. "I like forgah that was the blanket we used. I've had that thing like forever. Who knows — maybe my mother used it too! Ooh, Raddie, you better like wash that thing before you put it back on the couch!"

"Heh heh heh...That's like crazy an' shit," chuckles her son. "It's like one of them...f_ckin' whaddayacall...coincidences an' shit! Man, I should give the blanket to Valeska so when her kid gets with someone in the park, they can use it, too."

The teen-aged father of three — soon to be four — beams with pride as he holds the wadded up blanket. "This shit's like a family hair-loom — like that you f_ckin' hand down an' shit!"
at 9:09 AM