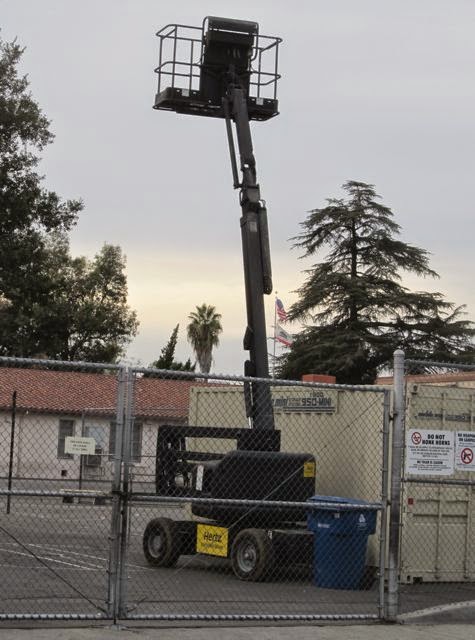 New for the 2014-2015 academic year, a series of industrial boom lifts placed strategically inside the tall, chain-link fence perimeter of the Canoga Park Elementary School playground are the brainchild of music teacher Judy Maxwell. “I caught some of ‘Escape from Alcatraz’ on Turner Classic Movies back in July, and it got me thinking.” She wrote up a proposal with her ideas and submitted it to the LAUSD Security and Corrections Advisory Committee who voted for it immediately. Each of the lifts is manned by a teacher, teacher’s aide, or parent volunteer responsible for maintaining a grim vigil overseeing a section of the schoolyard (or ‘yard, in student vernacular) grid during recess periods. If the results show promise, permanent guard towers may be installed where the rented lifts now sit as early as September 2015. “Inappropriate jumprope chants are down 18% this year already,” beams Maxwell from her perch high above the hopscotch courts and tetherball poles. “Eventually we hope to make inroads against gang recruitment as well.”

* * * * *
Proposition to “Optionalize” All Stop Signs Within Canoga Park Narrowly Loses
A bill making all stop signs in Canoga Park optional lost by a vote of 8 to 9 at an emergency meeting of the Canoga Park Friendly Neighborhood Council last week. 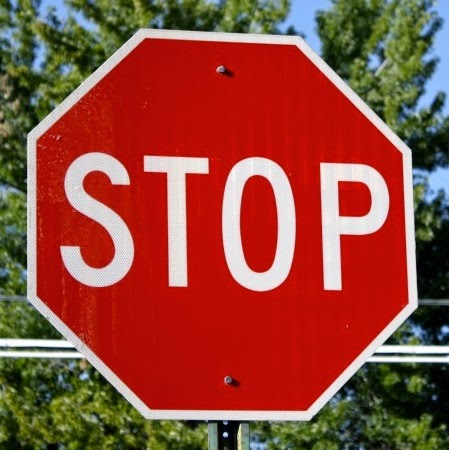 The proposed new law would have allowed drivers to choose whether or not to obey local stop signs based “on how much of a hurry they're in; their attention being otherwise occupied by texting, ‘dicking around’ on their phones, eating or other non-driving distractions; or to simply exhibit vehicular dominance and/or extreme indifference, disregard and apathy to anyone else on the road, whether other drivers or pedestrians.” Proponents of the bill have argued that it's only legalizing what most local drivers do anyway. The bill’s defeat was another blow to its co-authors, Friendly Neighborhood Councilmembers Marisol Mendez-Purcell and Daniel Iverson, who already had their share of bad luck that day when they were involved in a head-on collision with one another at the corner of Vassar and Wyandotte while rushing to get to the meeting to vote. “I’m not giving up,” said Mendez-Purcell from her bed at the Northridge Hospital Medical Center. “Once I’m able to walk again, I’m going to bring it up for another vote - well, as soon as I settle with that asshole Daniel, or, as it looks now, his estate.”

“I saw these guys taking a pick axe and a jackhammer to the clubhouse and I’m all ‘Holy crap, finally! It’s about damn time!’” says Téodor Pasternak, who ran home to get a sledgehammer and join in the destruction. “On the way back, I rounded up my neighbors and told them our long neighborhood nightmare was finally over.” Many came with crowbars, masonry saws, and one nearby resident was even ready to rent a bulldozer - but it was all for naught:  Turns out the two men - actually volunteer workers affiliated with the club - were merely trying to dislodge the building’s cornerstone containing a time capsule for an anniversary event, not permanently demolish the erstwhile Women’s Club (now operating as a weekly nightclub) as many in the clubhouse's immediate vicinity had hoped.
at 4:32 PM