Local Health Food Emporium Wins Injunction Against Proposed New Liquor Store
Canoga Park vegetarian grocery & restaurant “Follow Your Heart” has successfully won an injunction against business owner Razmik Barsamian preventing him from naming his new nearby liquor store “Follow Your Liver.” Attorneys for the beloved food store  - a haven for local vegetarians since opening in 1970 - reported that upon hearing of the proposed business name, their clients noted "hey, man, that's not cool."  They had further concerns over the planned name since the liquor store will be located less than a block from the natural food market and could lead to confusion that the two businesses are related. According to court documents, such a situation would "totally harsh our mellow." It was Barsamian’s intention to sell beef jerky at the register, however, that “was the last organic straw, man” for the famously vegetarian landmark's owners. Reached for comment, Barsamian said he’d go with his second name choice, "AA Liquor" and “that way I am at front of telephone book.”

Unpleasant Woman At Westridge Plaza Needs To Borrow A Dollar For The Bus
A woman in her late twenties at Westridge Plaza, located in Canoga Park’s bustling RoscoSoto shopping district spent six hours today wandering around the parking lot approaching customers leaving Dollar Tree, Sam Ash Music, Islands Market and other businesses with an appeal, varying from bored to matter-of-fact to mildly aggressive, to borrow one dollar for bus fare. When told by local resident Téodor Pasternak that “you know, you can just get on the bus and go - the driver’s not going to kick you off,” the unidentified woman reportedly stared blankly at Pasternak for a moment before a flash of annoyance lit across her face and she walked away to approach a family leaving Subway.

Scientist: Canoga Park Sand Mound To Be Completely Underwater By 2022
The Canoga Park Sand Mound, the municipally-protected landmark located on the southeast corner of Valerio and Vassar, is likely to be completely underwater as soon as 2022 according to Pierce College Winnetka meteorologist Dr. Morris Detzer. “There are a lot of variables, of course,” explains the professor of climate changology, “but say we have a number of heavy rain showers over the course of the next eight years, and little by little, it's slowly washed away into the gutter and then into the sewer - well, technically, it would be completely underwater, right?” Efforts to protect the large pile of sand by the side of the road are already underway, spearheaded by the LA Department of Street Services which is reportedly taking the approach of leaving it alone and “hoping for the best.” 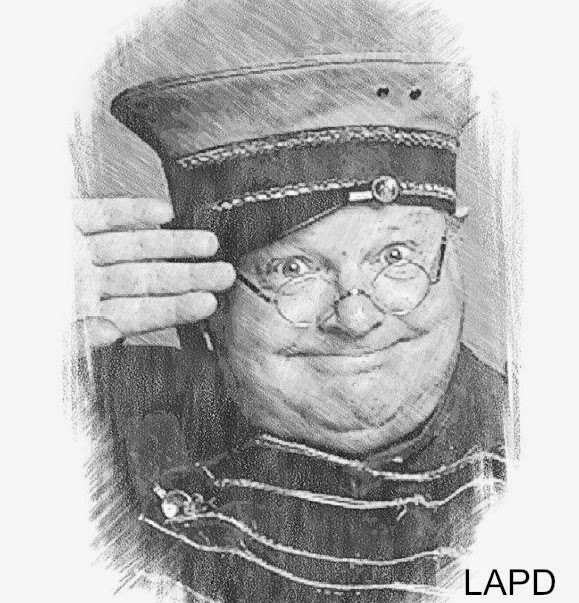 Police Release Sketch of Suspected Sherman Oaks / Van Nuys Groper
The LAPD has released a police sketch of a male suspect who assaulted five women last month in the Van Nuys / Sherman Oaks area. According to reports, the unidentified man approaches women on foot, passes them, then turns around and gooses them before running off in a zig-zag fashion across an open field followed by an increasingly large group of disparate citizens that has included the victims themselves, policemen, green grocers, nuns, workers painting park benches and on one occasion, a dog catcher with a large net. Witnesses say each of the incidents have been accompanied by peppy saxophone music, identified by police as Boots Randolph’s “Yakety Sax.”
at 10:00 PM