A homeless woman living in a storm drain near the corner of Nordhoff and DeSoto, in Canoga Park’s bustling NordSoto neighborhood has captured the hearts of all who have experienced her melodious tones wafting up through the grate, over the Drains to Ocean emblem, and into their earholes.

“I can’t believe a voice so beautiful is coming from somebody living in the sewer. They need to give her a recording contract,” said Ted Pasternak, an assembler at a local pool filter company, who paused to listen on his way to Subway to get lunch. “Of course, on the other hand, we pull her out of there, suddenly someone’s got to find her a place to live and no one knows where to put these people anymore.

“Well, she sure sounds happy down there, anyway,” he added before heading off to get his footlong Italian BMT on 9-grain honey oat with extra banana peppers.

Others echoed his sentiment as they listened to the mystery woman sing something that many described as an operatic aria:

“It’s beautiful. Haunting, really. And to think it’s coming from down there,” said Bernice Knudsen, on her lunch break at an insurance claims office. “This is the feel-good story of my daily walk over to Starbucks.”

Added metal fabricator Budek "Bud" Darula,
heading back to work carrying a bag from
Yoshinoya, “That singing! It's just amazing.
If there’s a Go Fund Me that I can throw a
nominal amount of money at so I feel like
I’m doing something good without getting
further involved, I’m all for it.

"But right now I gots to gets back to the shop
before this here beef bowl gets cold!”

Industry experts estimate the subterranean chanteuse could have a lucrative three-or-four week career making inspiring, tearjerking appearances on various talk shows, competing on reality competitions and providing a cappella music for Ellen to dance to — once someone from the Department of Public Works gets over there with one of those manhole cover lifters and she’s brought topside, hosed down and given a fresh set of duds.  “Then the sky’s the limit!” predicts Ari Vaskigorgian of Peppy Talent Representation & Day Laborer Procurement on Saticoy.  “At least for about a month until we all move on to something else.” 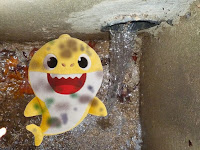 Correction: Turns out there was no homeless woman in the sewer but a musical, multilingual Baby Shark toy that likely was flung out a backseat car window by a fussy toddler, landed in the storm drain, somehow became shorted out from the water and got switched onto the Italian language version of the popular song.
We regret the error.
at 8:28 AM