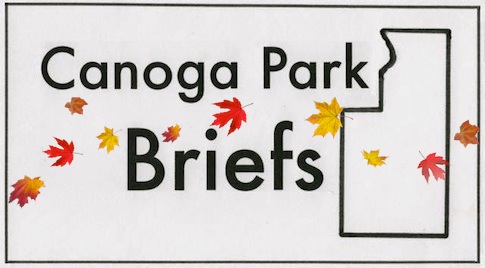 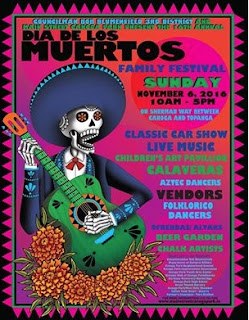 Controversial 'Dia De Los Muertos' Festival Returns To Canoga Park
The polarizing, family-friendly Día De Los Muertos festival will take place on Sunday November 6, from 10 am to 5 pm. The event will feature a beer garden, a children's art pavilion, vendors and food concessions. Live music, Aztec dancers, chalk artists, and many unflattering effigies of Donald Trump are scheduled to appear. The annual street fiesta and classic car enclogment of Sherman Way has been a source of friction since its inception due to its controversial name. "Technically, it should just be Día De Muertos. The 'Los' in this case is completely unnecessary. Christ almighty, that 'Los' drives me up the wall every year," says Dr. Morris Detzer, head of Spanish Language Studies at Pierce College Winnetka. Canoga Park Friendly Neighborhood Council festival organizement chairperson Murla Havemeyer explains that "whoever filled out the Special Event Permit Application with the City of LA Bureau of Street Services back in 2000 must have thought ['Los'] was correct so that's why it's there. And I just re-submit the same application every year." Havemeyer suggests those bothered by the inclusion of the extraneous article "pull the stick out of their ass and find something worth complaining about. Like how China Buffet's been closed for the past month or so."

Popular Chinese Food Buffet-Style Restaurant, China Buffet, Closed For The Past Month Or So
China Buffet, a restaurant offering Chinese food in the buffet style, has been closed since sometime in late September. The eatery, at the corner of Sherman Way and Jordan Avenue, has been popular among locals for its $4.99 all-you-can-eat weekday lunch special. "But the thing is, you had to buy a drink, too, or they charged you $5.99. So it wasn't really $4.99. That's how they got you," explains local gourmand Téodor Pasternak. "What I would do is go up [to the buffet] like six times. I was useless the rest of the day, but by God, I got my so-called '$4.99' worth." A sign in the foyer of the locked restaurant announces that it is temporarily closed for remodeling although no such activity has been noticed by hungry passersby who have pressed their dirty hands and greasy faces up to the windows to peer inside.

Civic Media Organization 'Voto Latino' Tailors Message For Canoga Park
Voto Latino, a non-partisan organization aimed at encouraging young Hispanic men & women to exercise their right to vote, has erected a large sign specifically tailored to one of Canoga Park's largest demographics. The billboard, located at the northwest corner of Roscoe and DeSoto Boulevards, in Canoga Park's civic-minded Roscosoto neighborhood, depicts a normal campaign sign designed to appear altered to promote the organization's message. "We wanted something that would really resonate with the typical Canoga Park resident," says Voto Latino director of Hispanic cultural outreach, billboard division, Colleen Chang-Schultz. "And what better way to promote the ideals embraced by Canoga Park's enormous tagger population than the concept of a billboard illegally defaced with spray-painted graffiti?"

Fans of McMuffins, Illegal Street Racing Excited For Time Change
The Canoga Park Department of Clocks and Time-Keeping announced that Daylight Savings Time is upon us once again. Or will soon end. No one is sure which. "What's important is that residents remember to turn their clocks ahea—  no, wait, back one hour on Saturday at two a.m. Those with grandparents living nearby should expect calls asking them to come over and reprogram the clock on their microwaves," says department head Donald Kronester. The archaic clock rejiggering, a semiannual tradition for as long as most can remember, has ceased to serve any useful purpose since the advent of electric lights in the late 19th century. Adds Kronester, "The good thing is with McDonald's finally serving breakfast all day, you're not going to get screwed out of an Egg McMuffin if you forget about it and show up late. Or would that have happened in the spring when we lose an hour? I can never remember." The additional time will be put to good use by some as street racers will have an extra hour tomorrow night to enjoy Canoga Park's fast-paced and increasingly popular sport of illegal street racing. "Yo, I heard that we can f_ckeen tear up Topanga [Canyon Boulevard] between, f_ckeen two and three a.m. an' shit — and since that hour don't technically exist an' shit, the LAPD can't f_ckeen legally touch us," says illegal street racing enthusiast Davtak 'Davvy' Barsamian, "an' shit."

Nearby Areas
West Hills' Stolen Taxco Trails Park Sign Replaced
West Hills 'Exclusive' Neighborhood Council president Bob Rawlins announced this week "that our long neighborhood nightmare is over — the [Taxco Trails Park] sign has been replaced." The approximately one-acre neighborhood park, located at the corner of Platt and Saticoy, in West Hills' exquisite Platticoy neighborhood, has been missing its sign since late September when it mysteriously disappeared overnight. In an unrelated story, James "Jimmy" Tasko, 16, of Reseda publicly thanked his friends on Facebook "for helping me with that crazy shit we did a few weeks ago" and inquired if anyone knows how to secure a heavy eight-foot long piece of wood to a bedroom wall.
at 12:55 PM