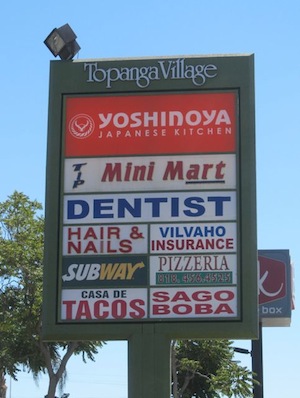 It may seem hard to believe, but it’s already been one year since the Topanga Village Shopping Center opened here in the West San Fernando Valley.

While nay-sayers initially decried the ambitious project, which saw the closure of the much-missed Costco (at Roscoe & Canoga) to relocate at its current inconvenient clusterf_ck location, or clusterflucation, the Village’s infamous parking fee nightmares in its first few months, increased traffical headaches for drivers attempting to negotiate the stretch of Topanga Canyon Boulevard that borders its west side, and the complete abandonment of the nearby Westfield Promenade (whose few remaining tenants are now presumed dead), the Westfield Corporation soldiered on, and made their retail dream a retail reality, or retailality.

Today, to the delight of countless Village visitors, the bustling shopping mecca features a plethora of stores, shops, shoppes, chic boutiques and eateries as well as other services in a convenient “one-stop” location for both busy Canoga Parkians and even “shopping tourists” (some from as far away as Winnetka).

Whatever tickles ones’ appetital fancy can be found at Topanga Village, from a sandwich jam-packed with fresh fixin’s — available in both six-inch or footlong lengths — at the whimsically-named “Subway,” to an exotic platter of tacos — from the far-away land of Mexico — at "Casa de Tacos," literally “House of Tacos.”

For diners whose tastes run to things l’Italiano, head over to “Pizzeria,” a pizza-themed restaurant that serves up hand-crafted pizza-pies in a pizzeria-style setting. And those hankerin’ for food inspired by the magnificent country of Asia would do well to try "Yoshinoya." Completely renovated for 2016, the popular beef-bowl restaurant acts as one of the shopping plaza’s main anchor stores (located at the far northwest end of the sprawling complex).

After a satisfying meal, many visitors like to relax by stopping at the Village’s official boba purveyor for a delicious boba-based tea, juice, or smoothie, to be enjoyed during a leisurely stroll around the center’s lushly concreted & paved grounds, artistically designed in a four-sided, or square, configuration.

There’s more than food at Topanga Village, though — many head there strictly for the shopping:  Need a can of cat food, a quart of motor oil, or a “scratcher” lottery ticket?  No problem — a miniature market, or mini-mart, resides in the complex, too, offering any number of these and other gift items. And those who slip on a discarded, non-winning scratcher in a puddle of motor oil to fall face-first onto a handy cement parking stop are in luck: Topanga Village even has its own dentist who can fix ‘em up good as new. Insider tip: If there’s a wait, get your hair and or nails done in one of Topanga Village’s many hair & nail salons. They’re easy to find since there’s only one. Or better yet, drop by your helpful, local insurance agent — also located within the Village — to ensure proper coverage for your next slip & fall.

Some nay-sayers — perhaps the very same who said nay prior to the mall’s construction — may claim the shopping complex is already showing its age after just one year, but any such minute signs of wear & tear are owed to the fabulous success and popularity of this destination marketplace. Free parking is now available in its expansive parking lot — with nearly three-dozen spaces — making the oft-teeming mall accessible to all even on the busiest shopping days, and a place to see and be seen among the Canoga Park elite.

Correction: It has come to our attention that we somehow conflated the enormous Village at Topanga outdoor mall with Topanga Village, a small shopping center in Canoga Park.
We regret the error.


Coming up next week in our Living section: 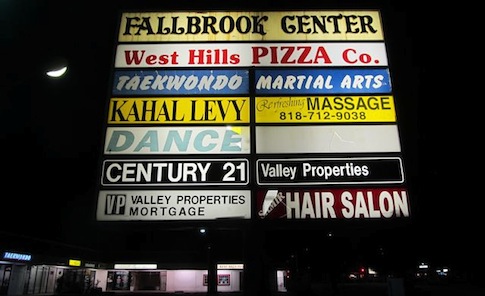 A fascinating, in-depth look at West Hills’ enormous and extensive 75-acre Fallbrook Center, home to Walmart, Target, Olive Garden, Home Depot, Red Lobster and Old Navy, among many other exclusive shops.
at 11:12 AM