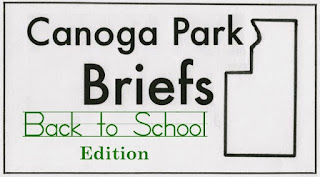 A brief, local round-up of local news you can use, briefly.

Canoga Park High School Releases Its Popular 'Mindset List' for 2015
Among the entries on the much-anticipated compilation of cultural touchstones that shape the lives of students entering as freshmen at Canoga Park High this fall: "...The internet has always been a part of their lives but in most cases, both of their parents have not. They've never worried about polio, scarlet fever, or smallpox but are the first generation to face the ongoing challenges of an unprecedented bullying epidemic. The antiquated, quaint practice of covering their mouths when coughing or sneezing is completely alien to them. The ability to share pictures of one anothers' genitals has always existed, but a sense of modesty or propriety has not. They recognize the music of 'Gangrene' but not the symptoms of it on their self-gauged earlobes. 'Tagging' has always meant something other than using a price gun to apply stickers on merchandise at an after-school job. 'Homework,’ ‘respect,’ ‘accountability’ and ‘paying attention in class’ are not phrases they recognize." The list is compiled annually by Arlene Butler, a tenured history teacher who “stopped giving a shit a few years ago when [she] got tired of competing with smartphones for [her] students’ attention and [is] now just trying to coast into retirement.”

Salvation Army Offers Back to School Values
The Salvation Army Family Store on Roscoe Boulevard is hoping to be your “one-stop back-to-school shop, for school supplies and such,” according to Donation Intake Coordinator Trenice Campbell. “We do have many items to choose from, like pencil boxes, Magic Markers, notebooks and whatnot. I even saw a paper-pad that the children can use, you know,  to do their lessons on. It says ‘A Letter from Denise,’ so if their name is Denise, they’re good to go.” Prices start at just 95¢ for some smaller items, but Campbell cautions that “with those Magic Markers, now we don’t check the boxes, so I don’t know if any are missing or they’re dried out or anything. Just so you know.”

School Staffer, Dollar Tree Under Fire For Insensitive Poster
A local discount store has come under fire for selling materials deemed ‘culturally insensitive.’ “I can’t believe this was considered a ‘teaching aid’” said Canoga Park Elementary teacher Sondra Pasquali when she saw a ‘Citizenship’ poster using such highly charged terms as “responsibilities” and “U.S. Citizens” on her wall on the first day of classes last week. “I immediately called the police to report a hate crime.” A teacher’s assistant, Judy Maxwell, has admitted to hanging the poster and “will be dealt with accordingly” according to a statement by the Los Angeles Unified School District. “I still don’t understand the problem,” shrugs Maxwell. “I saw it at Dollar Tree, thought it was good for learning about government — even used my own money to buy it. Anyway, I had the kids write angry letters to the store so everything’s good now.”

Canoga Park Library “Free Lunch for Children” Program A Success
The Canoga Park branch of the Los Angeles Public Library System offered free lunch to children each Monday through Friday from 12:30 pm to 1:30 p.m. this past summer. With the school year starting and LAUSD teachers once again in charge of feeding their students, the program has been discontinued, allowing local librarians to take off their aprons and get back to their usual librarial duties: babysitting the homeless, mentally ill and indigent. However, the program was deemed such a success that plans are underway to remove the library’s underused “Early Readers” and “Kidz Corner” sections and install a sundae bar and chocolate fountain for the 2016 summer season.
at 6:48 PM